Rep. Tulsi Gabbard Wants to Legalize Drugs (As in All Drugs) 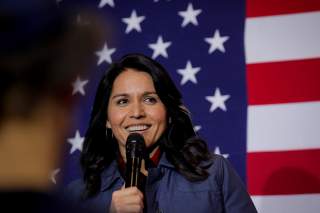 The New Hampshire primary on Tuesday will prove a make or break moment for Rep. Tulsi Gabbard of Hawaii. After having collected no popular support from the questionable Iowa caucus results, the congresswoman is relying on what has been a consistent 4-5% base of support in the Granite State.

Gabbard, whose key platform issue is an overhaul of the U.S. foreign policy establishment and opposition to “regime change wars,” has also staked herself out as the most progressive 2020 Democratic candidate when it comes to drug legalization.

When asked by a New Hampshire voter what she would about the “unjust” War on Drugs, Gabbard agreed with the voter’s suggestion to “legalize and regulate narcotics.” To justify that position, Gabbard mentioned the country of Portugal, which legalized all drugs in 2001.

“I think that when you look at the statistics that come out of countries like Portugal that have taken that ‘extreme’ step…the fears, and the myths, and the stigma around taking that stuff should be set aside,” she said. “Because ultimately what you see is there are fewer and fewer people who are unnecessarily being incarcerated, and there are more people who need help who are actually getting the help that they need.”

For Gabbard, drug policy is a question of personal autonomy and free choice. “When it really comes right down to it, that’s what this issue is about. It’s about choice,” she elaborated at the town hall. “And each of us as individuals living with and dealing with the consequences of those choices whether they be on our own personal health or impacting us in other ways.” However, Gabbard does not believe one of the consequences of drug use should be time in prison or a permanent criminal record.

The candidate further clarified that she was not advocating drug use, or that her views on personal liberty were reflective of her own decisions. “For me, I’ve never done drugs, and I won’t. That’s my choice,” she said.

This position, first announced publicly only three weeks ago, is a jump from Gabbard’s previous policies. Up until January, the congresswoman had promised to legalize marijuana at the federal level (having already introduced a bipartisan bill in the House), end the War on Drugs, and implement criminal justice reform. Her policy positions on her campaign website have not been altered to reflect her recent statements.

New Hampshire has so far only legalized marijuana for medical use, making it more restrictive than all three of its neighboring states and far from the policy Gabbard is prescribing. No matter what the primary results are, Tulsi Gabbard has pledged to take her campaign to the floor of the Democratic convention.