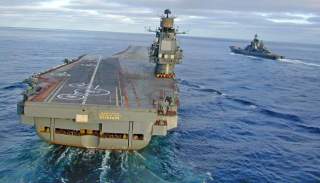 The cost to repair damage from the December 12, 2019, fire may be 95 billion rubles (US$1.5 billion), according to Russian business newspaper Kommersant, citing an unnamed source in the Northern Fleet.

“This is not only about damage to the structures of the aircraft carrier, but also about damaged repair equipment and failed military and civilian specialists due to injuries,” the source said. The fire occurred when a cable was set ablaze during routine welding in an engine room while the ship was docked at Murmansk, according to Russian news agency TASS. The fire spread across several decks and compartments, killing two people and injuring more than a dozen more.

Sources told TASS that “The accommodation cabins with garbage burnt out and that is why the fire will certainly not affect the timeframe of the aircraft carrier’s repairs," one source said. Another source said the fire could have been far worse. Another source said that “close to the burnt-out premises there were auxiliary diesel generators as well as containers with 140 tons of diesel fuel and 30 tons of machinery oil, which, fortunately, were unaffected."

Alexei Rakhmanov, the head of Russia’s state-owned United Shipbuilding Corporation, denied the repair costs would be as high as feared, TASS  said. “The information of some media that the amount of damage caused by the fire at the Admiral Kuznetsov will allegedly be equal to the cost of the aircraft carrier itself is completely untrue," Rakhmanov said.

Rakhmanov said the damage to the carrier was not severe. The ship “did not receive critical damage, since the equipment located in the compartment where the fire occurred was already dismantled during the overhaul.”

Regardless, to say that the Admiral Kuznetsov is an unlucky ship would be an understatement. It was a late Soviet-era vessel commissioned in 1991, a 55,000-ton carrier with a ski-jump flight deck and MiG-29K and Su-33 warplanes. But the carrier soon became legendary for oddities and mishaps. At sea, it belched thick black smoke, the product of a design decision to power the vessel with heavy fuel oil instead of the gas-turbine engines now standard in conventionally-powered Western ships. In 1996, during a Mediterranean cruise, the water distillation system broke down, leading the U.S. Navy to provide fresh water to 2,000 sailors and aviators. The carrier did manage to launch airstrikes against Syrian rebels in 2016, but lost at least one MiG-29K to mechanical failure.

In 2017, the Russian Navy announced that the Admiral Kuznetsov would undergo refit and modernization at a cost estimated at several hundred million dollars. Then came the infamous October 2018 dockyard accident when the Russians nearly sank their own carrier: a floating drydock servicing the Admiral Kuznetsov in Murmansk sank, dropping a 70-ton crane that tore a 215-square-foot hole in the carrier’s flight deck. Loss of the PD-50 dock – the only drydock capable of accommodating Russia’s large warships – will only complicate repair of the Admiral Kuznetsov.

In May 2019, Russia announced plans to build a nuclear-powered aircraft: at 70,000 tons, it would be smaller than America’s 100,000-ton Nimitz- and Ford-class carriers, but larger than the carriers operated by China, Britain and France. Russia may also build the world’s first catamaran-hull aircraft carrier.

Which raises the question of how long Russia will keep the Admiral Kuznetsov in service, and how much money it is willing to spend to do so. Or whether it will put the poor ship out its misery.