Report: China Is Capitalizing on ‘Informatized’ and ‘Intelligentized’ Warfare 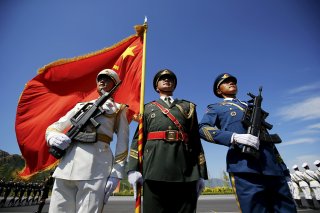 “In 2004, the CMC under Hu Jintao ordered the military to focus on winning ‘local wars under informationized conditions,’” according to the report. “In 2014, the CMC under Chairman Xi Jinping placed greater focus on conflicts in the maritime domain and fighting ‘informatized local wars.’” The report suggests that China is focused on practicing tactics that could help it annex or take over Taiwan.

“In 2020, the PLA added a new milestone for modernization in 2027, to accelerate the integrated development of mechanization, informatization, and intelligentization of the PRC’s armed forces, which if realized would provide Beijing with more credible military options in a Taiwan contingency,” according to the report.

This leads a person to wonder if China is seeking to replicate the Defense Department’s fast-moving Joint All-Domain Command and Control (JADC2) program, which aims to engineer a multi-domain “meshed” network of interconnected nodes across that will allow the truncation of sensor-to-shooter time from twenty minutes to twenty seconds?

Theoretically, the JADC2 would enable a forward-operating group of mini-drones facing incoming enemy fire to quickly transmit threat movement and target information to larger manned and unmanned systems in position to take immediate combat actions. The military-wide effort is based upon the premise that whoever is able to complete the “sensor-to-shooter” process more quickly and effectively is likely to prevail in warfare.

Army soldiers have already demonstrated that they can send and receive targeting data quickly with F-35 fighter jets. Additionally, Navy ship-based Aegis radars can network with surveillance airplanes and drones to fire interceptors at incoming ballistic missiles from beyond the horizon or visible radar aperture. Also, Air Force F-22 Raptors and F-35 fighter pilots are on the verge of operating groups of nearby drones from the cockpit of the aircraft. Each of these incremental steps toward the future of warfare represents a small part of a larger puzzle that the Defense Department has been putting together for decades. Now, it is in a position to approach or possibly even achieve goals that it has envisioned and pursued for many years.

China is continuing to watch and replicate successful U.S. strategies. The sophistication of its artificial intelligence-enabled multi-domain information sharing and how that technology has influenced the country’s modernization efforts and merits attention. The Defense Department’s report on China reflects a growing concern about China’s capabilities.