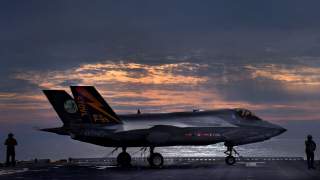 Early in June 2019, the Pentagon and Lockheed Martin struck a deal in which the former agreed to purchase 478 F-35 Lightning II stealth fighters for $34 billion. This could open the door for the sophisticated but controversial new stealth fighter to begin a 76 percent faster “full-rate” production status after eighteen years of troubled development and cost overruns.

Lockheed eventually hopes to sell over 2,400 F-35s to the U.S. Air Force, Navy and Marine Corps and over a thousand more to foreign operators. Already, over four hundred F-35s have been delivered under so-called “Low Rate of Initial Production,” many lacking the fixes and improvements implemented in later models. Theoretically, full-rate production should only be authorized once all major deficiencies being resolved.

However, on June 12, 2019, Valerie Insinna, Aaron Mehta and David B. Larter of Defense News published a series of articles based on newly acquired documents detailing thirteen Category-1B deficiencies impacting the ability of the Pentagon’s brand-new F-35 to perform their missions.

These flaws, many of which had never been previously disclosed—were formerly described as Category-1 flaws (posing risk of aircraft or pilot loss), but after the articles’ publication, they were retroactively accorded a new, less-serious Category-1B status.

Lockheed Martin has since posted a response on the program’s website, insisting that all but two of the flaws will be fixed in forthcoming upgrades.

In addition to its notorious developmental woes, the Lightning has long been criticized for being slower and flying lower than preceding fourth-generation jets. The F-35’s air-to-air strategy focuses on leveraging its advanced sensors and stealthy radar cross-section to detect and engage opponents with surprise beyond-visual-range missile attacks, rather than engaging in Top Gun-style within-visual-range dogfights.

However, the Pentagon maintains the Lightning performs adequately in old-fashioned dogfights. Many F-35 pilots have argued that the jet’s shortcomings have been exaggerated, and are far outweighed by its stealth and information superiority. A skillful performance by test pilot Billie Flynn at the 2017 Paris air show also countered the narrative that jet was clumsy.

However, the documents obtained by Defense News suggest the heavier F-35B and F-35C models may suffer significant flight performance restrictions.

The F-35B is operated by the U.S. Marine Corps and (eventually) the air and naval forces of the United Kingdom, Italy and Japan. It incorporates heavy lift fans allowing it very short take-off runs, and ability to land vertically like a helicopter.

The F-35C has heavier landing gear and larger “bat wings” to help it perform catapult-assisted takeoffs and landings from the decks of U.S. Navy supercarriers.

Documents acquired by Larter revealed that F-35B and F-35C pilots reported “unpredictable changes in pitch, as well as erratic yaw and rolling motions” when exceeding Angles of Attack of 20 degrees.

“Angle of Attack” (AoA ) refers to an airplane’s ability to pitch its nose at angles beyond its current trajectory. For example, a plane able to achieve extremely high angles of attack, like the Russian Flanker jet, can point its nose straight up, but continue to coast forward until its vector adjusts.

Essentially, aircraft capable high angles of attack, or “High Alph,” are more agile, allowing pilots to keep the engines, sensors and weapon pointed where they need to be. This is particularly vital for within-visual-range engagements.

In 2016, Norwegian F-35 pilot Major Morton Hanche wrote that in his experience the F-35 actually has superior high-AoA performance compared to earlier F-16—though he also noted the plane “shakes quite a bit at high g-loadings and at high angles of attack.” You can see a video on F-35C high-AOA testing here.

The more severe “erratic” behavior described in the report could pose a severe hazard when the pilot is attempting particularly demanding maneuvers. Indeed, a naval aviator in the document claimed the defect “will cause modal confusion, prevent precise lift vector control, and prevent repeatable air-to-air combat techniques, resulting in mid-air collisions during training, controlled flight into terrain, and aircraft loss during combat engagements with adversary aircraft and missiles.”

The problem thus appears to be both serious and pervasive. But Lockheed Martin insists, however, that it is implementing a flight control system patch planned for integration in the third quarter of 2019 that will result in this flaw being “resolved or downgraded.”

Modern jet fighters like the F-35 rely on computerized fly-by-wire control systems to interpret pilot’s joystick commands and automatically stabilize the aircraft using a variety of mechanisms. The forthcoming software fix would thus implicitly instruct the Lightning’s flight computer to automatically correct for the erratic behaviors experienced by F-35B and F-35C pilots.

That such a potentially serious flaw may soon be fixed is encouraging. The fact that the problem’s very existence was not revealed until now, less so.

A companion article will dig into the significance of other Category-1 problems revealed by new reporting, including restrictions that Navy and Marine Corps have imposed on usage of afterburners at supersonic speeds when flying at high altitudes.