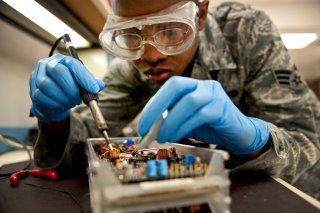 On January 14 the Pentagon released its annual report on the state of the U.S. defense and manufacturing industrial base. The estimated cost of the report was $159,000 USD and clocked in at 184 pages. The document, entitled US Defense Industrial Base Industrial Capabilities Report January 2021, is a congressionally-mandated, annual requirement in which the Secretary of Defense informs the armed services committees on the actions, investments, and overall health of the U.S. defense industrial base (DIB). The report is divided into nine component areas spanning the Department’s primary DIB lines of effort, the impact of the Covid-19 pandemic on the DIB, an overview of the U.S. defense industry, assessments of the sixteen industrial base sectors and emerging technology sectors, and overviews of the primary DIB authorities and investment mechanisms.

There are innumerable takeaways from the report but a consistent and glaring deficiency throughout reveals an erosion and degradation of the U.S. STEM (Science, Technology, Engineering, and Mathematics) education system and a severe shortage of technical talent in the U.S. workplace. The broad conclusion is that the United States risks losing its competitive advantage if it continues with its business-as-usual approach and fails to equip its workforce with the education and skills to develop and field complex, cutting-edge emerging technologies like artificial intelligence, autonomous systems, machine learning, and hypersonics.

1. How acute is the STEM education and talent deficit in the United States?

The STEM shortage in the DIB is quickly approaching crisis status. As stated by Arthur Herman, “We are fast approaching another Sputnik moment, we can’t afford to ignore.” The United States must create a “state-of-the-art STEM education strategy” to cope with this reality. The report assesses if the United States fails to modernize and adjust it likely will face a “permanent national security deficit.” The United States should not be surprised by this development as prominent U.S. business and government leaders have long been sounding the alarm about the decay of the U.S. education system.

In July, Admiral (Ret) William McRaven, the former U.S. Special Operations Command (USSOCOM) commander and chancellor of the University of Texas, was straightforward when pressed about which national security issue kept him up at night: “K-12 education." According to Admiral McRaven, “unless we are giving opportunity and a quality education to the young men and women in the United States, then we won't have the right people to be able to make the right decisions about our national security…They won't have an understanding of different cultures. They won't have an understanding of different ideas. They won't be critical thinkers.”

The report stresses that

Today’s education pipeline is not providing the necessary software engineering resources to fully meet the demand from commercial and defense sectors, and resources required to meet future demands continue to grow...Decades of neglect have left the robust system of technical schools the nation once relied upon for industrial training badly weakened and the existing workforce is rapidly aging out, taking irreplaceable tacit knowledge with them...Programmatic responses to education and training needs still largely focus on four-year STEM-based programs rather than digital industrial skills on the factory floor.

2. What does the report reveal about US STEM education trends in relation to Russia and China and the broader international community?

As the pool of U.S. domestic technical talent shrinks, the number of foreign students stepping up to fill the talent gap has increased. Analysis of the National Science Board’s 2020 Science & Engineering Indicators Report reveals that more than one-half of all U.S. doctorate engineering, computer science, and mathematics graduates are foreign-born. In addition, the DIB report explains how STEM-focused programs at U.S. universities are struggling to attract, and retain top-tier technical talent and are turning to foreign students to address this shortfall, particularly from China and India. In the 2019-2020 Academic Year, the United States hosted over one million international students, with 53 percent coming from China and India; over the past decade the total number of Indian students in the United States has more than doubled from 81,000 in 2008 to 202,000 in 2019. Over half or 52 percent of all international students in the United States were pursuing careers in STEM fields of study, with engineering the leading field of study followed by mathematics and computer science.

3. What does the DIB Report forecast about STEM occupational hiring trends and developments?

The DIB report asserts the production of engineers and scientists with U.S. citizenship, and the skills necessary to successfully develop and sustain the software is not keeping up with demand. As of 2017, American students made up barely 21 percent of the computer science student body and 19 percent of electrical engineering majors among our nation’s universities. This is problematic as seven out of ten STEM occupations were related to computers and information systems.

Findings from the U.S. Bureau of Labor and Statistics reveal that computer-science STEM occupations are forecasted to grow 12 percent by 2029, creating over half a million computer-science related jobs with demand for information security analysts, software developers, and computer research specialists poised to grow by 15 percent.

4. What does the DIB Report say about cyber-related trends, activities, and vulnerabilities?

To no one’s surprise, the DIB report reaffirms and underscores the need for the United States to bolster and ameliorate its cyber defenses. For example, the report documents the persistent threat posed by pernicious cyber-state actors to the U.S. manufacturing base and intellectual property. The report stresses that manufacturing is the second most heavily attacked sector in the U.S. economy with 35 percent of all cyber-espionage attacks in the United States targeted at manufacturing. The DIB report points out that of the 291,000 manufacturing establishments in the United States, 99 percent were small-to-medium size establishments with fewer than 500 employees and are unprepared to deal with a cyber-attack. The report also extolls U.S. intellectual property theft vulnerabilities to the tune of $450 billion in annual losses. To better address these vulnerabilities, the DIB Report assesses the present and future U.S. DoD cyber workforce must develop a broader and deeper understanding of analytics and key emerging technologies, such as autonomy, human-machine interaction, and artificial intelligence. This will require personnel to adopt new methods in how they approach cyber defense and collective security to an “Always On” 24/7/365 mentality.

5. What does the DIB Report say about the U.S. DoD workforce trends in artificial intelligence and machine learning?

The U.S. DoD artificial intelligence (AI) and machine learning industrial base face several key challenges going forward to include recruiting and retaining personnel with AI expertise compared to the commercial sector. The DIB report underscores how a declining U.S. AI domestic workforce is complicating DoD capacity in leveraging private commercial technology for military applications. This will almost certainly complicate DoD’s plans to cultivate and hire experienced, top-tier AI talent equipped with the knowledge, skills, and core competencies to build and deploy the AI across the force that will be critical to fight and win the wars of the future.

6. What should the Biden administration and Secretary of Defense Lloyd Austin take away from this report?

The DIB Report portends that without “serious and targeted investment—billions instead of millions—America’s defense industrial base is simply unsustainable, let alone capable of supporting our deployed forces and legacy equipment while solving the complex warfighting challenges posed by advanced technologies in the 21st century, from AI and cyber to hypersonics and autonomous air and sea systems.”

The new U.S. secretary of defense, Lloyd Austin, stated his department will ensure all DIB companies have access to the requisite tools and resources to counter the full range of cyber-security threats, support a whole-of-government approach to enhance domestic industrial capacity, and satisfy U.S. defense requirements—a top Biden priority.

President Joe Biden has articulated that developing, and sustaining a robust, capable, and responsive STEM workforce is critical in slowing the spread of the Covid-19 virus that has killed 420,000 Americans. The United States should be encouraged by his executive order elevating the Office of Science and Technology Policy (OSTP) within his first week in office to a cabinet-level agency that will strengthen and enhance the relationship between academia, industry, and government to advance emerging technologies in protecting national security. The Biden administration would do well to inculcate and enhance STEM investments in U.S. public education, particularly at the K-12 level where just 31 percent of Americans assessed in primary and secondary schools were performing at above average in STEM programs.