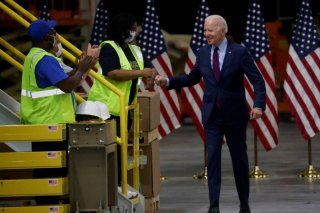 The number of Americans receiving unemployment benefits has dropped in more than twenty states as governors recently ended the extended jobless insurance, according to a new analysis.

The analysis, which was first reported by The Wall Street Journal, comes as the federal government boosted unemployment benefits by $300 a person each week and made them available for as long as eighteen months, a measure that extends far beyond the usual twenty-six weeks or less. The benefits are expected to expire in September, but several Republican-led states have opted out of the weekly payments, citing the widespread labor shortage.

Missouri Gov. Mike Parson (R), leading one of the first states to cut off the payments as of June 12, said that although the added benefits were helpful at the peak of the economic crisis, their prolongation has “worsened the workforce issues we are facing.”

Ohio Gov. Mike DeWine (R), another governor who ended the payments, said in a tweet last month, “When this program was put in place, it was a lifeline for many Americans at a time when the only weapon we had in fighting the virus was to slow its spread through social distancing, masking and sanitization.”

Missouri nixed the payments as of June 12, along with three other states that were first in the slew of GOP-led states to cut the measure. And each week after, more states have ended the benefits, including Ohio on June 26. Four more states will cut benefits by July 10.

The Journal reported that, since mid-May, the number of workers paid benefits from state-level programs dropped 13.8 percent by the week ending on June 12 in states that have signaled that benefits would curtail in June, according to an analysis by Jeffries LLC economists. The study found that there was a 10 percent decline in states that have the bonuses ending in July, while there was just a 5.7 percent decrease in states where benefits will be cut in September. Workers enrolled in state programs won’t see the $300 weekly bonuses but can opt into getting state-level insurance.

“You’re starting to see a response to these programs ending,” Aneta Markowska, Jefferies’ chief financial economist, told the publication. “Employers were having to compete with the government handing out money, and that makes it very hard to attract workers.”

There were also larger declines in the number of people receiving benefits from pandemic-related measures in states that were cutting them off, according to the analysis, but the data falls behind by an extra week.

Democrats, however, have argued that the $300 weekly boost is needed for families who lack adequate access to child care and for those who are still fearful of contracting Covid-19, as those factors, among others, are keeping Americans out of the labor force.