Report: The United States Air Force Is Too Small 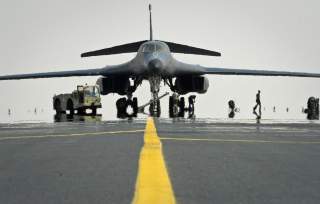 The United States Air Force is too small to meet the security challenges that meet the nation, a new study conducted by the RAND Corporation has found.

In the unipolar moment that followed the immediate aftermath of the Cold War, American conventional military dominance allowed the Pentagon to assume some risks in force readiness and capability requirements for conflict with a major power while it undertook various open-ended “peace enforcement” and counterinsurgency operations. But in an era where the United States faces the threat of a rapidly rising China and a resurgent Russia, the findings are especially concerning.

Air Force leaders have long been aware that their service has essentially been engaged in continual low-level warfare since the first Persian Gulf War in 1991 with no respite in sight. The Air Force has attempted to mitigate the severe impact of such a high optempo on its men and materiel, but those fixes—such as the Air Expeditionary Force construct—were only temporary fixes. But now the Air Force is nearing the breaking point.

“Although service leaders and the Chairman of the Joint Chiefs of Staff have been increasingly candid and direct about the readiness and retention problems caused by overtasking and under resourcing of the military, as of May 2018 there appears to be no significant reduction in demand on the horizon,” the authors of the study noted.

The RAND researchers examined four potential future scenarios to make their assessment—two Cold War-type scenarios, a peace enforcement scenario and a counter-terrorism/counter-insurgency type scenario. The Air Force had serious shortfalls in every scenario that RAND assessed.

“No USAF aircraft class in the FY17 force can be considered robust across all four futures,” the authors wrote. “There is no formal threshold for robustness, but it seems reasonable to expect the force to meet at least 80 percent of demands in every future (green in our charts). No aircraft class did that. Fighter aircraft came the closest, meeting 93 percent or more of demands in three futures and 64 percent in the remaining. C3ISR/BM platforms, reflecting their small fleets and high demand, are the least robust across the four futures, meeting 84 percent of demands in one future but only 29 percent to 63 percent in the others. Tanker aircraft are particularly interesting, because they were highly robust (90 percent or more demands met) across three of the futures but met only 32 percent of the demands for the Peace Enforcement future.”

The RAND study found that out of the all of the scenarios, ones where the service is forced to commit to prolonged open-ended conflicts do the most damage to readiness. Indeed, the study showed marked improvements where deployments were capped.

Neither the U.S. Air Force nor the Defense Department have the power to dictate how long the nation will be engaged in war—that is up to policymakers at the cabinet level and the White House.  But military leaders can be more vocal about the demands being placed on the troops.

“Operations become prolonged because objectives change, because objectives turn out to be more difficult to achieve than initially anticipated, or because of adversary actions,” the RAND authors note. “USAF leaders have little, if any, control over these factors. That said, armed with this evidence that prolonged operations are a driver of capacity shortfalls, USAF leaders can advocate for more force structure, develop alternative force presentation models that may more efficiently use existing forces, and, perhaps, nudge National Security Council principals and the President to be more aware of the risks and costs of prolonged operations.”

However, given that the United States foreign policy establishment in Washington is essentially addicted to foreign military interventions, the only real fix is to expand the Air Force both in terms of manpower and materiel. It is simple not possible to sustain the current pace of operations with a force this small.