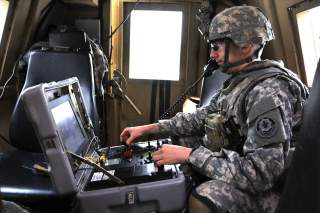 The U.S. troops who disarm explosive devices have become indispensable in IED-strew battlefields like Afghanistan and Iraq.

But Explosive Ordnance Disposal, or EOD units, are undermanned and overworked. And one big reason is that EOD specialists are increasingly being used to protect politicians and other VIPs, according to a Government Accountability Office report.

The topic is considered so sensitive that the initial GAO report was secret, with only the unclassified version released to the public.

By law, military EOD units are tasked with supporting civil authorities in protecting American VIPs such as the President, as well as foreign dignitaries and domestic law enforcement agencies. The problem is that when the Department of Defense calculates the number of EOD personnel needed, it only includes wartime requirements rather than defense support of civil authority (DSCA) needs.

The combined military services have only 6,300 slots. In the Army’s case, even that number has been reduced since U.S. troops were withdrawn from Iraq. “Due in part to force structure adjustments and the drawdown of EOD forces since 2014, according to information provided by the Army, the Army has reduced more than 800 EOD positions, the equivalent of two EOD battalions and 13 EOD companies,” GAO noted.

“In multiple instances, missions supporting civil authorities have stressed the Army’s EOD capabilities, resulting in missed training and the inability to participate in exercises and activities supporting combat-related missions, according to statements and data provided by the Army. Furthermore, fulfilling VIP support missions can be particularly difficult because short-notice demand for EOD teams often exceeds the planned VIP support demand that can be supported. As a result, Army EOD teams are sometimes dispatched at the expense of military preparedness for combat-related missions in support of combatant commands, according to Army officials.”

The Navy has actually refused to conduct some VIP support missions because it lacked enough EOD personnel to handle those assignments while still meeting operational and training demands. But that only meant that U.S. Northern Command (NORTHCOM), which coordinates civil support missions, had to ask another military service to fulfill them. “Because NORTHCOM has few permanently assigned forces to conduct VIP support missions, it must instead rely on EOD forces from each of the military services that are in-garrison and preparing for but not currently deployed to a combat-related mission,” said GAO.

The Department of Defense can’t even estimate the negative effect of VIP support because the military services are not required to notify the Joint Staff or combatant commands when military effectiveness has been compromised by these missions. The report – or at least the unclassified version – did not include an estimate of how many additional EOD personnel would be needed to fulfill both military and civil missions.

GAO recommends that the military services consider civil support requirements when estimating their EOD manpower needs, and that the Joint Staff and combatant commands are notified when military preparedness is affected.