Report: The U.S. Military Is Spending More and Getting Less Firepower 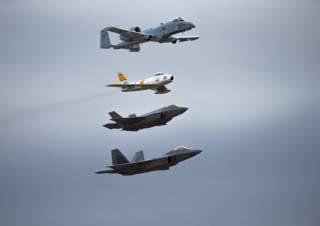 If the Pentagon had to take Consumer Math class in high school, they’d flunk.

The U.S. military—correction, the U.S. taxpayer—is spending more money to buy fewer weapons. The reason? Poor acquisition practices, according to a report by the Government Accountability Office (GAO).

GAO blames this on several factors. “Portfolio-wide cost growth has occurred in an environment where awards are often made without full and open competition. Specifically, GAO found that DOD did not compete for 67 percent of 183 major contracts currently reported for its 82 major programs. GAO also observed that DOD awarded 47 percent of these 183 contracts to five corporations and entities connected with them.”

United Technologies, Northrop Grumman, General Dynamics, Boeing and Lockheed Martin accounted for almost half of the contractors for these eighty-two programs, including the Army’s Armored Multi-Purpose Vehicle, the Navy’s Ford-class aircraft carriers, and the Air Force’s Combat Rescue Helicopter.

Another factor is the Pentagon adding new capabilities to existing programs rather than creating new programs, which means existing programs take longer to complete. “On average, programs in the current portfolio are about 4 months older than last year and nearly 3 years older than in 2012,” GAO said.

GAO defines knowledge-based acquisition as government agencies taking steps to “gather knowledge that confirms their technologies are mature, their designs stable, and that their production processes are in control. Successful product developers ensure a high level of knowledge is achieved at key junctures in development. We characterize these junctures as knowledge points.”

All of which sounds like sensible purchasing practices: make sure the product is fully developed and can be properly manufactured before you buy it. Unfortunately, the Pentagon thinks otherwise.

For example, prior to the critical design review stage, the Army’s CH-47F Block II program “did not elect to developmentally test a fully configured, production representative prototype in its intended environment. Instead, the program plans to initiate this prototype testing in August 2019 (20 months after CDR)—an approach inconsistent with best practices. Until the program completes this testing, it cannot know whether its design is actually stable.”

Then there is the F-35 stealth fighter, the poster child for controversial acquisition practices. “In October 2018, the program office updated its acquisition strategy, providing a general schedule for future technology development and integration. The program plans to field new capabilities starting in October 2019, but it has yet to complete its acquisition program baseline. As a result, the program is concurrently testing, producing, and modernizing aircraft, which increases the risk of future schedule and cost overruns.”

For the Ford-class carriers, “the Navy accepted delivery of the lead ship, CVN 78 [USS Gerald R. Ford], in May 2017 despite challenges related to immature technologies and struggles to demonstrate the reliability of mature systems. The Navy reports that 10 of the Ford Class’ 12 critical technologies are fully mature—the advanced arresting gear (AAG) and one of the ship’s missile systems are not yet mature,” GAO said.

“Shipboard testing is ongoing for several critical systems and could delay future operational testing. Those systems include the electromagnetic aircraft launch system (EMALS), AAG, and dual band radar (DBR). Although the Navy is testing EMALS and AAG on the ship with aircraft, the reliability of those systems remains a concern. If these systems cannot function safely, CVN 78 will not demonstrate it can rapidly deploy aircraft—a key requirement for these carriers.”