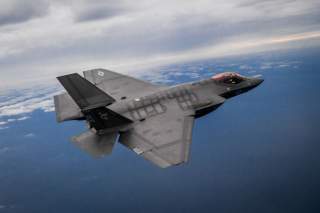 At 14 pages, this year’s assessment is much shorter than those of previous years. The 2017 report was a full 29 pages, while the 2016 report was 61. The gap between the arbitrary end of developmental testing last April and the beginning of operational testing in December 2018 partially explains this report’s brevity.

But that does not explain the omission of significant information from this year’s report, particularly areas of reporting that had been included before. As noted earlier, the report does not contain a single mention of the program’s fully mission capable rate, from this year or any year. The 26 percent rate reported in the last assessment was appalling, and likely caused program leaders a great deal of embarrassment. That is hardly an excuse to leave out the figure this year.

DOT&E also withheld new data about key performance metrics that were included in the 2017 report. The 2018 report contains only two charts of data, down from last year’s ten. The 2017 report included a chart showing the program’s availability rates broken down by location, with detailed numbers. This year’s report simply said the rate was below the program’s goal of 60 percent.

The 2017 report also included a chart listing the weapons delivery accuracy test events and the success and failure status for air-to-air missile firings, air-to-ground deliveries, and gunnery. Aside from the discussion of the gun test, no mention of the program’s combat-testing performance appeared in the 2018 report—even though further tests were conducted. Security concerns must not have been the deciding factor in leaving that out, as the Air Force made public a successful test event in April 2018, well within the reporting period of the latest assessment.

Under federal law, the testing office must write an annual report on the programs it reviews and submit an unclassified version simultaneously with submission of any classified version. The smaller amount of information included in this report compared to previous years suggests that DOT&E may be taking cues from the White House and Pentagon leadership on reducing transparency and withholding information that had previously been made public.

Testing Office and Congress Must Protect Troops and Taxpayer Interests

Now nearly a decade behind schedule and $200 billion over budget, the F-35 program continues to perform far below expectations—and is nowhere near to fulfilling the Pentagon and Lockheed’s many promises. Its continuing performance and design failures are not commensurate with the massive investments made for the past 20 years. At this point, the operational testers should complete the original stringent testing plan agreed to by the services, the F-35 program office, and DOT&E, without succumbing to powerful political pressure to sacrifice combat-realism for expediency. Only then will anyone know if the F-35 will actually work in combat—and whether our troops would be well supported when the F-35 replaces the A-10. Until then, to serve the troops and taxpayers better, Congress should stop increasing F-35 production rates every year, as every incompletely tested, deficiency-laden F-35 built will waste even more taxpayer dollars on costly retrofits.

Congress should also demand that DOT&E return to its previous transparency. Lawmakers should then use that operational test transparency to shoulder their oversight responsibilities, and demand that the withheld information be made public.

The American people, especially the men and women who will have to trust their lives to the F-35, deserve nothing less.

This article by Dan Grazier originally appeared in The Project on Government Oversight on March 19, 2019.