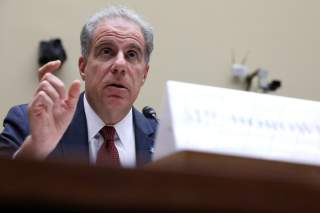 Justice Department Inspector General Michael Horowitz said Wednesday that House Democrats have not contacted him to testify about his anticipated report on potential FBI surveillance abuse during the Trump-Russia probe.

Republicans quizzed Horowitz at a House Oversight subcommittee about the forthcoming report, which looks at whether the FBI improperly surveilled Trump campaign adviser Carter Page. The report is expected to be released in the next several weeks.

Horowitz declined to provide details about the investigation, including whether any current or former FBI officials will be referred for prosecution.

Republicans used much of the hearing to point out that Democrats have shown little interest in discussing the potential FISA abuse issue.

“We haven’t had to my knowledge discussions about testimony or a hearing,” Horowitz told Ohio Rep. Jim Jordan when asked if Democrats have contacted him to testify about the report once it’s released.

On Friday, Horowitz informed House and Senate committees that he has concluded the FISA probe, and that he has submitted a draft report to the FBI and Justice Department for review. Georgia GOP Rep. Doug Collins immediately called on House Judiciary Committee Chairman Jerry Nadler to set up a hearing for Horowitz once the report is made public.

In a separate congressional hearing on Wednesday, Jordan asked Nadler whether he has reached out to Horowitz about testifying.

“Have you had any contact with Mr. Horowitz about when he might be in front of this committee to answer questions about the very subject we are learning about today?” the Republican asked.

Nadler dodged the questions, saying, “We will review any such letter.”

Has @RepJerryNadler been in contact with IG Horowitz about scheduling a hearing on the FISA abuse report?

Nadler: “We will review any such letter.”

Republicans have eagerly awaited Horowitz’s FISA report. They have accused the FBI of abusing the FISA system by relying on the unverified Steele dossier to spy on Page. The special counsel’s investigation severely undermined the dossier’s core claim that the Trump campaign conspired with the Kremlin to influence the 2016 election.