The Responsibility to Protect Doctrine and Ukraine 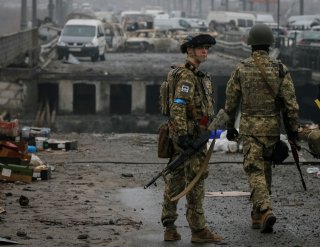 The Responsibility to Protect (R2P) Doctrine was unanimously adopted at the World Summit in 2005 as a result of the various atrocities that were committed in the 1990s; it states that sovereign countries have the responsibility to protect their citizens from various mass atrocities (genocide, war crimes, crimes against humanity, etc.), and that the international community has the “residual responsibility” to “use appropriate diplomatic, humanitarian, and other peaceful means” to protect populations from the same. The doctrine also says that collective action will be taken “should peaceful means be inadequate and national authorities are manifestly failing to protect their populations from genocide, war crimes, ethnic cleansing and crimes against humanity.”

R2P was invoked by the UN Security Council in 2011 during the Libya crisis. It did not end well: NATO soon began shifting towards an explicit policy of regime change. Muammar el-Qaddafi was then killed, and the country’s descent into violence afterward left a failed state. This was one of the first failures of R2P in practice.

R2P would also be used in 2010-2011 in Côte D’Ivoire after then-President Koudou Laurent Gbagbo refused to cede power. Gbagbo’s supporters then targeted and killed 3,000 people they perceived to be their political or ethnic enemies. Again, the UN Security Council authorized R2P as a reason for a military intervention into Côte D’Ivoire, after which the atrocities ended. However, violence is still very much a problem in the country, and it has become clear that underlying tensions were not resolved in 2011. This is another overall failure of R2P in practice.

Since then, R2P has not been invoked; however, there are three major examples where one could argue that it should have been. The first example is Syria. With over 400,000 dead and 200,000 missing, it is hard to argue that mass atrocities have not been committed. There have also been banned weapons in use, specifically chemical weapons. However, R2P was never invoked by the UN Security Council as a reason to intervene. This is largely because of the fact that the Permanent Five (P5) members have veto power over resolutions, and, while no vote was ever taken, it was understood that Russia would use its veto power as it supports Syrian President Bashar al-Assad.

The second instance is Myanmar. In 2016 and 2017, large numbers of the Rohingya minority in Myanmar’s Rakhine State were killed largely because of the fact that they practice Islam instead of Buddhism. They were never recognized as citizens and excluded from the country’s 2014 census. By 2016, the Burmese military was burning villages and attacking civilians; this continued in 2017. However, yet again, R2P was not invoked. This is largely due to two different reasons: the first being the previous invocations of R2P ended up as failures, and the second being a simple unwillingness to prevent these atrocities. Since then, U.S. Secretary of State Antony Blinken has called what happened a genocide, but it remains to be seen if anything will be done.

The last modern argument for R2P is in China, and its actions against the Uyghur minority. Over the past several years, China has been accused of detaining Uyghur people in re-education camps, forcibly sterilizing them, torturing them, and sexually abusing them. Additionally, mosques have been destroyed, and the Uyghur language is no longer allowed to be taught in schools. Why has R2P not been invoked in Xinjiang? This is explained by China’s status on the world stage as one of the P5 and its economic influence.

Does R2P apply to the Ukraine crisis? President Biden has accused Russia of perpetrating genocide. The horrific actions in Bucha have triggered widespread condemnation. But R2P will not be invoked because of Russia’s ability to veto any such resolution.

Ellie Shackleton is the Program Assistant at the Center for the National Interest. She has contributed to two policy reports on climate change. You can find her on LinkedIn. She may or may not be related to the explorer, it's a bit unclear.