Resupply Gliders Could Be the Future of Military Logistics 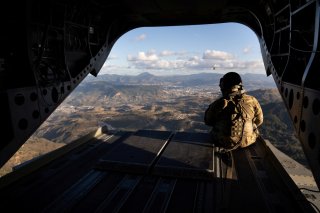 A company developing glider supply technology wants to revolutionize how troops in the field receive supplies. The company, Silent Arrow, is developing what is essentially a box with wings that can be dropped from a fixed-wing aircraft or even from a helicopter.

According to a recent press release from Silent Arrow, an “Air Force of a U.S. allied government in the Middle East” recently used the proprietary GD-2000 cargo delivery drone in an overseas deployment for the first time

Information provided by Silent Arrow highlights some key facts about the DG-series gliders. It explains that the disposable stand-off delivery platform can carry over 1,600 pounds of payload in a two by two by eight container.

Though unpowered, the Silent Arrow system could be an attractive stand-off delivery system because of its relatively compact size and the silent nature of its unpowered flight. A variety of items can be packed inside the flying box, including MREs, ammunition, water, and fuel. However, the company’s ultimate goal is for the system to be able to supply one rifle squad for one day of “heavy direct-action combat.”

“As we prepare for mass production, it’s encouraging to see foreign allied governments as enthusiastic about the new capabilities Silent Arrow brings to the warfighter as the U.S. military has been,” Silent Arrow’s founder and CEO stated in the press release.

“We have distribution agreements in place for 37 countries so far and are working hard to become the worldwide standard for airdrop logistics.”

A Silent Arrow promotional video shows how their glider system works. In the video, a glider is released from a plane’s cargo hold, and its pop-out wings quickly spring outward and guide the glider to the ground.

Dropped from an altitude of 25,000 feet, the Silent Arrow’s GD-2000 offering has a range of forty miles. When dropped from a helicopter at an unspecified altitude, the GD-2000 boasts a range of approximately fifteen miles.

The company also offers another variant powered by a 180-horsepower electric engine that is capable of taking off from improvised airstrips.

Thanks to the base model’s unpowered nature, the glider could offer a virtually silent resupply capability. In addition, due to its GPS navigation system and LiDAR rangefinder, the GD-2000 can provide a much more precise resupply capability when compared to legacy parachute resupply systems.

The advantage offered by Silent Arrow’s resupply system—virtually silent and potentially very precise resupply—would be of benefit to warfighters on the ground, but also to airplane resupply crewmembers who would be kept farther away from ground or air-based threats.