The Reviews Are in for Sony's A8H OLED TV 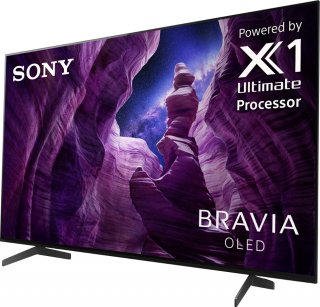 Last month, Sony began shipping its A8H OLED TV, which was introduced at International CES back in January. The TVs, which are available in 55 and 65-inch classes, are priced at $2,299.99 and $3,099.99, respectively. They're available at Best Buy and Amazon, among other places.

Now, two reviews have appeared of the new TV.

Digital Trends, in a review published last week, praised the A8H series as "superbly cinematic." Giving the TV four stars out of five and its "Editor's Choice" designation, the review praises the A8H for its "gorgeous design" and "exemplary picture quality," while also having positive things to say about its sound quality and HDR performance.

The listed drawbacks include that the Sony A8H is expensive, while it lacks HDMI 2.1 support.

The site had listed another Sony TV, the A9G, its best TV of 2019. For the A8H, Digital Trends says that "for the best OLED TV picture quality you can find with a truly cinematic experience, the A8H is a top choice.”

“The Sony A8H (A8) is priced a little higher than LG CX and Panasonic HZ1000. It is more feature-packed than the latter but does not fully match the features of LG CX, with its HDMI 2.1 ports and functions," he wrote. "It is up to you to decide whether that matters but ultimately, given the competitive field, Sony's TV falls just short of our Highly Recommended Award.”

Tom's Guide also posted a side-by-side evaluation of the Sony TV against LG's CX series, and called it essentially a tie.

"If size options and pricing are the priority, then LG is the clear winner. The LG CX OLED has more size options and is more affordable across the board," the story said, while noting that the site has not yet run a full review of the A8H series. "If you want the best picture quality and audio you can get, then the Sony A8H is the OLED TV of choice, but you will pay more for the privilege."

RTINGS hasn't yet reviewed the Sony A8H, although its rankings currently place two other Sony OLED models, the A9F from 2018 and the A9G from 2019, 7th and 8th in its overall TV rankings, as the highest-ranked models from a manufacturer other than LG.