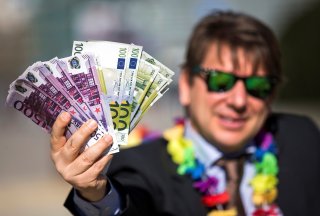 The wealthiest 1 percent of Americans have used various legal tax loopholes to avoid paying an estimated $163 billion in taxes this year, according to a blog post by the Treasury Department.

The Treasury Department reported that over the next decade, the government is likely to lose around $7 trillion in lost earnings—a scenario described as a “tax gap,” or an estimated amount of money owed by taxpayers that goes uncollected.

While tax dodging is not confined to any particular earnings group, tax evasion is far more common among wealthier Americans, who can afford to hire experts that can help them take advantage of the IRS’s many tax loopholes. Moreover, wealthier Americans’ incomes tend to be composed of more than a paycheck, including other lines of revenue such as capital gains—meaning that income taxation, which tends to be very efficient, is far more likely to capture all needed revenue from low- and middle-class Americans than from upper-class Americans. Other arrangements that allow for tax evasion include partnerships and proprietorships, forms of business ownership with complicated tax arrangements.

“Today’s tax code contains two sets of rules: one for regular wage and salary workers who report virtually all the income they earn; and another for wealthy taxpayers, who are often able to avoid a large share of the taxes they owe,” Treasury Deputy Assistant Secretary Natasha Sarin wrote in the blog post.

The Biden administration has made tax reform a major objective of the next four years, including closing loopholes for wealthier Americans and increasing funding for the IRS to pursue tax cheats. President Joe Biden has repeatedly called on the wealthiest Americans to “pay their fair share,” noting their tremendous success during the pandemic and its accompanying recession.

One reason for the Biden administration’s emphasis on collecting additional tax revenue has been its search for sources of revenue to pay for expensive government projects—including the $3.5 trillion reconciliation bill, which passed the Senate and is currently under debate in the House of Representatives.