Is the Right to Repair Just Wrong? 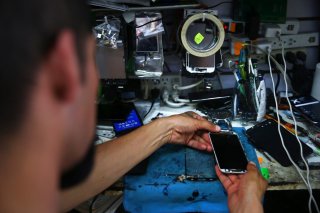 There is a growing movement across Europe: "the right to repair," which could give consumers the option to turn to third parties to repair damaged equipment. The movement is also gaining steam in the United States, and later this week President Joe Biden is also expected to sign an executive order that would call upon the Federal Trade Commission (FTC) to draw up rules on the repair of farming equipment.

Tractor manufacturer John Deere is among the companies opposed to the idea, suggesting it would pose a safety risk if non-official parts were used or repairs were made by someone not fully familiar with the products.

However, the "right to repair" may not be limited to heavy machinery – and some in the United States have called for it to include consumer electronic devices including phones, game consoles, and even TVs. The tech giants have fired back with their own concerns that include security and safety of their respective devices. Some lawmakers have cited the environmental benefits of making a device repairable – such as repairing a mobile phone screen if it is damaged – as opposed to throwing it away and buying a new device.

Supporters of the movement say it could increase the lifespan of a device or equipment, but the fact remains that consumers already replace their mobile handset when a shiny new model comes out, not because it is broken.

Then there is the issue that opponents bring up – namely, it could drive up the price. Does a consumer really benefit if a TV can be repaired but costs an additional $500 at the time of purchase? If it doesn't break the product costs more, and if it breaks the repair costs could still tack on several hundred dollars in parts and service fees. Perhaps here is where a lower-priced product is a better solution for the consumer.

The tech world will likely fight the "right" for a third party to repair a device, yet that isn't to say the industry is against repairs in general.

"In terms of the tech industry, I think some confusion exists between the 'need to repair' and the 'right to repair,'" explained technology industry analyst Charles King of Pund-IT.

"In the former case, the general quality of tech devices, components, and manufacturing have resulted in products whose low cost and reliability make repair superfluous," King told The National Interest. "We've seen that dynamic evolve across a host of consumer-grade electronics devices, including TVs, audio/video equipment, scanners/printers and other PC peripherals."

However, those products can still be repaired – at least by authorized service dealers. The issue at hand is different because the tech companies want to maintain control of their intellectual property or IP.

"Must a manufacturer offer enough information for others to work on its products?" pondered Jim Purtilo, associate professor of computer science at the University of Maryland.

"Firms invest an immense amount of capital into design of intricate products, and availability of detailed documentation about their operation lowers the bar for a competitor to create cheaper knock-offs," Purtilo told The National Interest. "There's not a strong self-interest for any company to facilitate this. Consumers of course desire products that can be readily maintained, so as always the market will balance these competing interests. We'll know the value of 'maintainability' by observing how much consumers pay for repairable devices  - phones, computers, cars, and appliances – over those in closed-end product lines."

Companies thus may have a genuine interest in protecting brand reputation, should repair parts of vastly lesser quality come on the market.

"A classic example that many consumers have learned about the hard way is the power brick for their Apple notebook computer," added Purtilo. "These are expensive to replace from Apple, and we can find 'replacements' at a fraction of the cost by shopping online elsewhere. What's the difference? Apple builds quite a lot of device protection into its charger, while a fly-by-night outfit in China can save manufacturing costs by omitting such circuitry. Both look the same, but when that replacement fails it is far more likely to fry the computer at the same time. It would be easy to say caveat emptor – let the buyer beware – but in the end, it is still Apple's reputation which will take a hit."

Is It A Matter of Safety?

The question, of course, is whether the argument of consumer safety is one that needs to be considered, especially as some products can cause bodily harm if a repair isn't done right.

"The 'right to repair" is more of a philosophical or, in some cases, legal issue where manufacturers make it difficult, impossible, or even criminal for product owners to attempt to fix devices or hire a third party to do so," suggested Pund-IT's King. "Apple and some other handset makers are the poster children for this behavior at the lower end of the scale and cloak their requirements in statements of concern for consumer safety. But automakers, including Tesla and farming and industrial equipment manufacturers, like John Deere, are taking a similar approach by voiding product warranties or instituting other penalties if owners engage third-party repair shops."

King noted that this could be an issue of creating a revenue stream that continues to flow after the initial purchase was made.

"Manufacturers want to maximize profits by more efficiently milking their customers but their aggressive policies often verge on coercion," he added. "While over a dozen states are considering or implementing 'right to repair legislation,' this is an area where centralized Federal action is preferable. President Biden's executive order to the Department of Agriculture to give farmers the right to repair their own equipment is an excellent first step. His reported plan to urge the FTC to similarly press computer and electronics manufacturers should measurably benefit countless consumers and small businesses."

Even if the "right to repair" is passed, it won't mean that products will suddenly become repairable either.

"This greatly depends on the manufacturer and what regulatory obligation might be imposed on it. A company could just put out documentation and say 'best of luck,'" said Purtilo.

"Potentially, this invites people to inflict more damage via poor repairs than they fixed by having the information," Purtilo added. "Alternately, a company could invest a bit more into their design in order to make it more modular and maintainable, then offer diagnostic guides for performing repairs. This would cost a bit more upfront, but we'd like to think consumers would reward that if the long-term costs become lower. Some products today have opaque design and genuinely defy reasonable efforts to work on them. How much consumers care about this is reflected in our purchases. When qualities of the closed system seem to outweigh those of a maintainable system, then we have the market's answer."