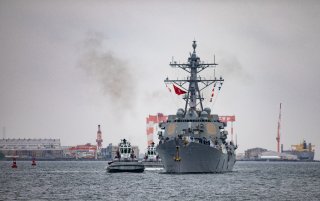 With the world’s largest maritime exercise recently concluded, one of the United States Navy’s top sailors reflected on the lessons learned and what could be done differently for the following Rim of the Pacific exercise in 2024.

Speaking during a media call, U.S. 3rd Fleet and RIMPAC 2022 commander Vice Adm. Michael E. Boyle explained that one of the biggest takeaways from the exercise was the need for more flexibility rather than relying on a highly scripted set of fixed maneuvers.

“What that did for us was that the scripted allows us to really enhance tactical training between tactical units, but by being unscripted it now allows us to give training in more of the leadership role,” Vice Admiral Boyle explained.

“So if you were the commander of a task group/force or a combined component commander, having to think through an unpredictable program forces you to think like you would have to in crisis, and that’s any crisis, whether it is humanitarian assistance or conflict and that is probably one of the biggest lessons that we got out of this RIMPAC.”

RIMPAC is the world’s largest maritime exercise, and this year’s iteration included twenty-six countries. This year’s deputy commander, a Canadian, concurred with his American counterpart.

“We’ve already sketched out some ideas, things that we’ve learned, some improvements that we’d like to make and that will feature in the 2024 series,” Canadian Rear Adm. Christopher Robinson said.

One of the more unique aspects of this year’s exercise was that the Red Hill Fuel Depot in Hawaii is now permanently closed. During World War II and the years following, the depot served as one of the United States’ main fueling points in the Pacific.

Rather than relying on Red Hill, the RIMPAC participants were forced to incorporate more flexible logistic chains.

“So that kind of takes away some of the requirement for fixed site logistics hubs like Red Hill because we’re able to do that from a mobile platform, a more survivable platform, at sea. In this case, we really did move our capability and our proficiency at refueling at sea for all our partner nations to new heights,” Vice Admiral Boyle explained.

“And that to me is just a small example of the benefit of coming together and of operating together, as we are like-minded and when we need to operate together in crisis, we already know how to do it. We don’t have to learn those lessons, we’re learning them during RIMPAC. My goal for this RIMPAC was that everybody learned, and go back with competence and maybe some skills that they didn’t have and I can tell you without doubt that has happened for every participant,” Vice Admiral Boyle said.