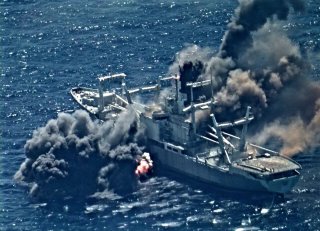 U.S. and allied nations fired weapons to destroy an amphibious assault ship in the Pacific Ocean during the ongoing multinational Rim of the Pacific exercise, as a way to assess the lethality and destructive power of sensors, weapons systems and ship defenses in a manner that could not be replicated through simulations.

“Sinking exercises are an important way to test our weapons and weapons systems in the most realistic way possible. It demonstrates as a joint force we are capable of high-end warfare,” Royal Australian Navy Capt. Phillipa Hay, commander, RIMPAC 2020 Task Force One, said in a Navy report.

There are certain requirements for the SINKEX exercises, to include a need to sink a ship in six thousand feet of water and at least fifty nautical miles from land.

While simulations are increasingly accurate at replicating various combat complexities, exploding bombs in the water brings a unique and irreplaceable element to ship warfare preparation. Among other things, it allows for forensic study of things such as damage assessments, blast impact and platform survivability. This can help allied nations learn about and refine weapons and sensors. For example, ships can be damaged by bombs simply exploding in their vicinity, without necessarily “striking” a ship. These kinds of dynamics are part of why ships such as carriers are slated to undergo “shock trials” to assess a platform’s ability to withstand a wide range of bomb and weapons attacks.

Also, actual weapons firing can be necessary to assess the need for dispersed, or disaggregated forces to conduct “blue-water” warfare on the open seas. Such an effort is consistent with the Navy’s Distributed Maritime Operations strategy which endeavors to better prepare the service for longer-range, less congested maritime warfare. Longer range weapons, missiles and sensors are increasingly able to target surface ships and submarines at much greater distances that is currently possible. This not only requires more advanced layered defenses but also means that targeting technologies and precision-guidance systems woven into weapons systems need to be tested in real-war types of environments.

The RIMPAC exercise, which reportedly involved more than ten nations, is also intended to assess and replicate allied interoperability, another reason why live-fire exercises are necessary.  Nation-to-nation maritime combat networking is also quite difficult to replicate via computer simulation, a circumstance which underscores the importance of having allied countries identify and pass target data to one another.