RIP 5.56 Round: The Army Now Has a New Bullet That Can Pierce Any Kind of Body Armor 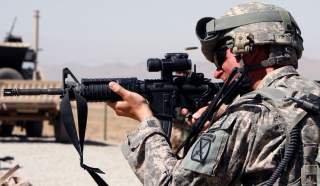 Key point: Warfare is a constant battle between better and better armor and bullets. In this case, America is looking to regain the upper-hand once again.

This article originally appeared at Task & Purpose. Follow Task & Purpose on Twitter. This first appeared in 2019 and is being reposted due to reader interest.