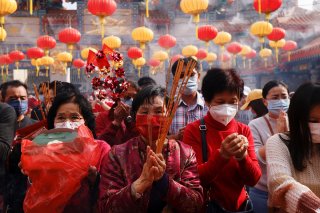 When Beijing replaced London as Hong Kong’s overseer back in 1997, its residents were promised they would “govern Hong Kong with a high degree of autonomy” for the next fifty years. They were also told the “ultimate aim” would be to have the local government’s chief executive and all legislators chosen by “universal suffrage.” The existing legal and economic systems were to remain intact.

That was then. Now, twenty-four years and many broken promises later, this depressed former British colony is being forced to accept something entirely different that most residents clearly don’t want—“democracy with Chinese characteristics.” It means China is reshaping Hong Kong society into one more like that on the mainland—where citizens cannot choose their leaders because leaders choose themselves, and serious dissent is forbidden.

This has brought China much criticism and numerous penalties for reneging on those promises and the Sino-British Joint Declaration about the 1997 handover, lodged at the United Nations as an international obligation. Yet Beijing insists that the Declaration has lost validity and outsiders have no right to “interfere” with how it rules Hong Kong. Even so, the United States has sanctioned thirty-four Chinese and Hong Kong officials for their part in the crackdown, and canceled trade privileges that benefited the city. It also has forced two companies to cancel plans for undersea data cables from California to Hong Kong for fear Chinese spies would tap them. One other result: an annoyed and sanctioned Hong Kong Chief Executive Carrie Lam must collect her $672,000 salary and pay bills in cash because she can no longer use an international bank.

Announcing the latest sanctions—on the eve of meeting senior Beijing foreign policy officials—Secretary of State Anthony Blinken said Beijing’s action “further undermines the high degree of autonomy promised to the people of Hong Kong and denies Hong Kongers a voice in their own governance.”

China has begun a major overhaul of Hong Kong’s political system to ensure that its sharpest critics—the pro-democrats who hoped promises of real self-rule would come true—will never again have a major voice in managing the territory or shaping its policies. That job, in form at least, is nearly complete.

The present 70-person Legislative Council (Legco) is being abolished, to be replaced by a 90-member version with crucial differences. Previously, 40 seats effectively were filled by popular vote, with others chosen by mostly pliable interest groups tied to the establishment. But a few groups, such as those representing lawyers, educators, and social workers, sometimes chose candidates who favored more democracy. This often gave pro-democrats enough seats to form a “blocking third,” able to halt unpopular government bills and force legislative compromise even though the rules didn’t let them initiate bills.

No more. The next Legco, to be installed within a year, will have 90 members, with 70 named directly or indirectly by the mainland’s ruling Chinese Communist Party; some will come from party affiliates and others from interest groups it dominates. Whether any pro-democrat will seek one of the remaining 20 powerless seats is uncertain; the format guarantees they could be no more than disgruntled sideline critics. Most leading figures couldn’t even try; they are either in jail charged with ill-defined “subversion,” in exile or are banned from politics under terms of a new National Security Law imposed by Beijing.

Another change tightens the method of selecting Hong Kong’s chief executive. Until now, a 1,200-member election committee dominated by the pro-Beijing faithful chose the government leader. However, it was possible for a pro-democrat to get on that ballot to stand in token opposition when the full committee voted, though chances of victory were approximately nil. The new system cancels that. It adds 300 new members—nearly all of them now serving as Hong Kong delegates to two powerless mainland political bodies. It also rigs the candidate selection process so that only party-backed choices can get on the election committee ballot, as a new bureau will vet candidates for all Hong Kong offices to ensure they are suitably “patriotic.”

These changes will take effect once Beijing provides final details of exact terms and remaining bits of the current Legco votes itself out of existence. The National People’s Congress (NPC), China’s rubber-stamp parliament which ratifies party instructions, approved all this by a 2,895 to zero vote, then applauded itself for doing so. Dissent “must not be allowed to damage the fundamental system of the country—that is, damage the leadership of the Communist Party of China,” warns Xia Baolong, Beijing’s director of Hong Kong and Macao affairs.

But much more than revising the political system is involved. Beijing is also changing rules about education, speech and the press, the legal system, and other civic rights Hong Kongers had assumed were here to stay. This doesn’t match harsh crackdowns carried out in Tibet and Xinjiang Province, but the goal is similar: persuading local residents to become obedient Chinese citizens who “love” the nation and the Chinese Communist Party—not loyal to a Hong Kong with a somewhat separate identity.

Consider education. Seven recent government documents outline how schools must conform to the new laws. As one pro-government educator explained, “Critics will of course like to say it is brainwashing….But national security is a very important concept. Young pupils should get to know some basics of it too.”

In fact, instruction will begin at age six. First-graders will be taught to listen to the national anthem “respectfully,” for example, and learn that the People’s Liberation Army protects them. They also will memorize the “four main offenses” against national security. Whether they must also perform the mainland’s simple song and dance praising Communist party leader Xi Jinping—“Xi Da Da” (Uncle Xi)—isn’t clear. Upper grades must learn, among other things, why Beijing needs to have offices in Hong Kong monitoring local affairs, the challenges China faces overseas, and why remaining civil rights come with state responsibilities.

At the university level, students—who comprised most protestors at recent mass protests against mainland policies—have been warned they will face “severe consequences” if they disobey new laws; the Chinese University of Hong Kong has already cut ties to its student union and punished 10 students. An official committee is studying how to revise coursework at all eight publicly-funded universities, which the government’s chief education officer said will help “prevent and suppress” future violations. One pro-government loyalist has even called for installing classroom cameras to “objectively monitor” what teachers say and do, though that brought a negative reaction. But the government hotline for making anonymous charges about possible disloyalty by family, friends, and others has so far recorded more than 40,000 calls (though some may be fakes to clog the system).

One of Hong Kong’s main attractions for both business and residents has been a legal system based on British common law, complete with several foreign judges. But it’s in danger. Though Hong Kong’s de facto constitution guarantees free speech and press, among other rights, the new security laws revise the criminal code and make some exercise of these rights criminal offenses. Acts that authorities call “subversive” or “seditious” (and these are poorly defined) can bring arrest, denial of bail, shipment to the mainland for trial and life sentences. For example, 47 leading pro-democracy figures have been arrested on specious charges with most denied bail; they wait in cells for trials at unspecified dates and face possible life terms. The ones the party dislikes most, such as 73-year-old publisher Jimmy Lai, may die there.

China rejects the rule of law concept that has prevailed in Hong Kong, with its independent judiciary and statutes that apply even to political leaders. Hong Kong’s (recently sanctioned) sole delegate to the NPC says courts must stop acting like “an independent judicial kingdom,” and prefers the mainland model where they can serve as enforcement arms for party policy. He said judges, like all others, “should be subject to the supervision of society” and not be allowed to apply “obscure norms and values from overseas which are totally unsuited to Hong Kong’s circumstances.”

One target is Paul Harris, a British barrister who heads the Hong Kong Bar Association. He had the temerity to ask the local government to seek some modification of Beijing’s harsh new terms and thus earned sharp rebukes from Chinese propagandists. One influential mainlander calls his election “a disgrace” and insists “Harris must go!” Otherwise, he writes that Hong Kong may nullify the associations’ legal status and cancel its advisory role on legal matters. American experts on Chinese law fear Beijing plans to subvert the system permanently.

Hong Kong’s press is also under fire. For example, the government-owned broadcaster, RTHK, can no longer exercise independent news judgment. Its senior managers have been replaced by malleable civil servants with no news experience; Chief Executive Lam has called past practices “unacceptable” and told new bosses “to set things right.” The media generally practices more self-censorship these days, partly because some owners fear various investments could suffer if they irritate Beijing. Reporters who question officials aggressively have lost jobs. The city’s main English-language paper, the South China Morning Post, has so far continued serious journalism, but its fate is uncertain. The current owner is the innovative mainland Internet company Alibaba, whose president Jack Ma has irritated President Xi and financial regulators. Thus, Alibaba has been ordered to divest itself of media investments. SCMP control could pass to a more pliable owner and become little more than a local version of the official China Daily.