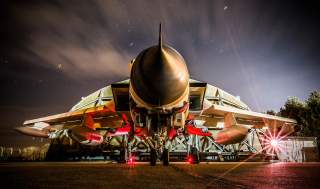 One-third of Britain’s military aircraft isn’t available to fly, according to British media.

“Figures unearthed by freedom of information campaigners show 142 of 434 of the air force’s planes have been sidelined,” said the British tabloid Daily Mirror.

Some planes and helicopters have been mothballed, while others are down for major maintenance. The problem spans numerous models, including the Royal Air Force’s flagship fighter, the Eurofighter Typhoon.

“Military top brass revealed 55 of the 156 Typhoon jets are in the RAF’s ‘sustainment fleet’ - and not in its ‘forward fleet’ ready to be deployed on operations,” the Mirror said. Even aircraft in the forward fleet, which should be available for operations, are down as “short-term unserviceable aircraft.”

In addition to the Typhoons, “five out of 20 Atlas A400M transport planes are in the sustainment fleet - despite the first of its type only being delivered in 2014,” said the Mirror.

Almost half of the RAF’s jet trainers are down. “Some 44 of 81 Hawk T1 jets - used by trainee fast jet pilots and the world famous Red Arrows [RAF aerobatics team] - are in storage or maintenance,” the Mirror said.

The RAF’s fleet of radar and surveillance aircraft have been particularly hard hit. For E-3D Sentry airborne radar and control planes, three out of six are down (earlier this year, British lawmakers complained that only one of the six aircraft was operational due to inadequate maintenance). Only three of five Sentinel R1 surveillance planes were operational, along with just four King Air 350 aircraft.

Britain’s helicopter fleet isn’t doing much better. Out of 60 Chinook helicopters, 19 are down, while only seven of 23 Pumas are operational.

The Mirror did reassure its readers that “the only aircraft types where no planes have been shifted to the sustainment fleet is the RAF’s four-strong squadron of BAe 146 planes - used by the Royal Family and senior ministers, including Theresa May, for short-haul trips - and the F35-B Lightning II jets, the latest stealth fighters.”

Predictably, Britain’s opposition lost no time in faulting the Conservative government of Prime Minister Theresa May, which is already floundering over stalled negotiations with the European Union to implement Brexit. Britain’s military has also been plagued by reports of equipment problems, including Type 45 destroyers that spend most of their time in port after breaking down during operations in the Persian Gulf. The government’s own auditors have warned that the nation can’t afford the military’s latest shopping list, which includes nuclear submarines, armored vehicles and F-35 jets.

“Conservative cuts have had a crippling effect on this country’s defenses and our ability to respond to the range of threats that the UK faces,” said Shadow Defense Minister Nia Griffith. “In 2017 it was the year of the Navy, but so many of our frigates and destroyers are tied up for months on end. In 2018, when we were all so proud to mark the centenary of the RAF, it is very surprising that so much equipment is unavailable. It is time for Conservative Ministers to be honest about their legacy of eight years of austerity in defense.”

The British military replied that it is normal for aircraft to be down for maintenance. “The sustainment fleet includes aircraft undergoing maintenance, upgrade programs or being held in storage,” said a RAF spokesman. “Modern military aircraft are highly complex machines that require careful management and maintenance to ensure they are fit for service and in sufficient numbers to fulfil tasks we call upon them to complete.”

Lord Ming Campbell, spokesman for the Liberal Democratic party, agreed that it is normal for aircraft to be sidelined for maintenance. “But the strength of the Royal Air Force depends not just on the quality of the pilots and their aircraft but availability to meet any threat or to take part in NATO operations. These figures seem to go beyond what is necessary for repair or service.”

Yet the truth is that Britain isn’t the only country with aircraft maintenance problems. The U.S. General Accounting Office found that numerous U.S. aircraft models, including F-22s and B-52s, suffer from low availability due to inadequate maintenance and lack of spare parts. Earlier this year, most of Germany’s Typhoon fighters were found to be unflightworthy.