Rise of the White Hulls in Southeast Asia 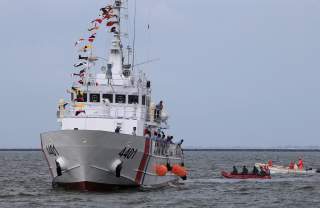 By the turn of the twenty-first century, coast guard organizations in Southeast Asia have been emerging as the new maritime constabulary force. Malaysia, Indonesia, the Philippines and Vietnam have established or improved their respective coast guard organizations independent of the navy. The mandates of these agencies are not limited to maritime-security and law enforcement, but also includes maritime-safety and marine-environmental protection. While there appears to be some regional momentum behind the creation of coast guards in each country, it is worthy to note that the geographic location of these countries coincides with the Japanese sea trade route starting from the South China Sea to Malacca Strait.

While some scholars argue that coast guard organizations in the region are rising due to the territorial conflicts stirred up by the rise of China, current perspectives are still deficient on rationally explaining how these militarily inferior white hulls fit into military strategies that aim to secure territorial claims in the South China Sea. Other leading maritime scholars argue that the United Nations Convention on the Law of the Sea (UNCLOS) has led states to recognize the need to create another maritime agency that is different from the navy to enforce laws at sea, manage maritime resources, and safeguard national interests. However, this argument does not explain why the upsurge in coast guard development did not immediately transpire after UNCLOS entered into force in 1996 and why such an effect could only be found in the Southeast Asian region.

Although, it is known that Japan had been the main supporter of the emergence in coast guard, it is crucial to understand how its imperialist past was completely forgotten by sovereign sensitive countries in the region. The Japan Coast Guard’s role was only highlighted during the early 2000s when the spike of piracy incidents had increased in Malacca Strait. Nevertheless, this claim does not address the issues on region’s sovereign sensitivities and the imperialist legacy of Japan. Citing the experience of the United States in 2003, when they proposed the Regional Maritime Security Initiative (RMSI) to counter piracy in the region both Indonesia and Malaysia rejected this plan. However, when Japan hosted HACGAM and introduced the Asian Maritime Security Initiative (AMSI), without an ounce of criticism, it was unanimously approved. Likewise, it is noteworthy to mention that Indonesia and Malaysia even asked Japan to help them build their coast guards of their own patterned before the Japan Coast Guard to address these non-traditional security threats.

Still, the question remains why they trusted Japan? To answer this, it is necessary to look at the past engagements of JCG to these littoral states. In 1969, Japan being the major user of the Straits of Malacca and Singapore, faced a serious problem because a number of Japanese supertankers had been involved in maritime incidents. For the littoral states to allow Japan in taking the lead role for maritime safety improvement of the strait and not to see it as an intervention from the major user, Tokyo tapped the Japanese shipowners to be its representative in improving the safety of its commerce in the strait, which until now is called us the Malacca Strait Council. The shipowners then commissioned Japan Maritime Safety Agency (name of JCG then) to conduct hydrographic survey and other maritime safety related projects. It has to be emphasized that the Hydrographic Bureau of JMSA which used to be under the Japanese Imperial Navy before has the most sophisticated equipment and technical knowledge compared with other countries because of its long experience even before the Second World War.

The approach of Japan to engage Southeast Asia did not just end through maritime safety cooperation. In 1975, the Japanese tanker, Showa Maru carrying a cargo of 237,000 crude oil ran aground the Strait of Malacca and spilled almost 4,500 tons which reached the shorelines of Singapore.  This incident was used by Japan to boost the cooperative role of JCG in the region by providing experts related to maritime search and rescue, maritime disaster prevention and marine environmental protection. Coupled with international awareness due to numerous tanker incidents that resulted to the passage of MARPOL 73/78, Japan has used this trend to engage Southeast Asian countries once again. Moreover, in this particular decade, Japan had delivered two brand new fast craft search and rescue coast guard vessels to the Philippines as part of its reparation payment in 1973.

These two strategic approaches of Japan starting from the maritime safety then to marine environmental protection have diminished the militarist identity of JCG but rather buttressed their intention of positive cooperation to achieve a maritime order that would benefit not just Japan but the entire region. The two-decade long maritime cooperation before the piracy attacks spike in Malacca Strait had soften the ground for Japan. JCG’s presence in the region to ensure the safety of Japan’s sea trade route at the same time helping the sovereign sensitive Southeast Asian countries for capacity building in maritime safety and marine environmental protection served as an opening to change their perception towards Japan’s imperialist past. Thus, when the Japanese freighter, MV Tenyu in 1998 and cargo ship, MV Alondra Rainbow in 1999 were attacked by the pirates, it was easy for Japan to seek for their cooperation to the point of building their own coast guards.

In 2005, the newly created Malaysian Maritime Enforcement Agency (MMEA) asked the JCG to help train its personnel. MMEA was patterned after JCG, which consolidated various maritime-related agencies into a single command to focus and enhance Malaysia’s ability to deal with various maritime-related crimes. In cooperation with JICA in March 2006, Japan gave two navigation vessels to MMEA to help its anti-piracy efforts. The JCG also continuously provides training and technical assistance to MMEA, to professionalize its officers and men in performing maritime law enforcement. Such support have continued with the funding from JICA, which includes “Project on Enhancing Practical Capacity for Maritime Safety and Security and Improving Education and Training Program.”

At present, there are more or less twelve national agencies that are handling the maritime security affairs in Indonesia. In 2005, then President Susilo Bambang Yudhoyono ordered the establishment of Maritime Security Coordinating Board to revive its role of coordinating the twelve national agencies. The JCG in cooperation with JICA has assisted in the establishment of the Bakorkamla. Many have high expectation that Bakorkamla would eventually evolve in becoming a coast guard, however, due to turf wars among the twelve agencies, the existence of Bakorkamla was never optimized. In 2014, President Jokowi set up Maritime Security Agency (Badan Keamanan Laut, Bakamla) to replace Bakorkamla with greater authority to coordinate and deploy maritime assets. In 2017, JICA/JCG-Bakamla cooperation was signed with the commitment of strengthening the maritime security cooperation of the two countries.

In 1988, Japan’s Defense Agency published on its white paper that the United States military bases in the Philippines plays an important role in maintaining peace and stability in the region because the energy requirements of all the countries in the Pacific passes in its immediate vicinity. The challenge then in the 1990s for Japan after the US bases withdrawal was how Japan could establish maritime cooperation with the Philippines that could warrant the safety of its sea trade route and guarantee maritime order. Since Japan’s defeat of the Second World War, it has benefited on the security and safe usage of the sea dominated by the American naval forces as its primary protector of trade. Accordingly, the Maritime Safety Improvement Project which started in 1991 is the first initiative of Japan to engage the Philippines using the same concept of developing the maritime safety infrastructure that they used in SOMS. For this reason, JCG was once again tapped to support and build strong maritime cooperation with the fledgling Philippine Coast Guard in four areas: maritime law enforcement, maritime search and rescue, navigational safety, and marine environmental protection.

With the intention of patrolling its territorial claims in South China Sea without militarizing it, Vietnam asked Japan to provide white hulled-bottoms in 2009. Vietnam’s Marine Police was founded in 1998 and only became independent of the military in 2008 which later became Vietnam Coast Guard in 2012. VCG was reportedly removed under the military to make it eligible in receiving patrol boats under the Japanese aid programs. Since it was originally considered as a military institution even if it was performing coast guard related functions, Japan has not supported VCG, not until it was removed from the Navy. In 2012, Japan agreed to build an education and training center to professionalize its ranks as it performs maritime policing operations, and at the same time the first ever joint search and rescue training exercise between JCG and VCG was also conducted. In 2015, the JCG intensified its cooperation with VCG by conducting more coast guard training exercises relevant to its functions.