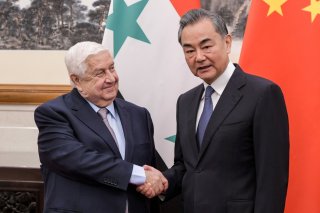 As Damascus’ forces gradually recover more territory, with Idlib province being the last rebel stronghold, Syria is now entering a “postwar” phase. Yet while Syrian president Bashar al-Assad’s forces have prevailed on the battlefield, his victory has come at a heavy price. The ten-year Syrian Civil War has killed over half a million people and displaced at least another 6.6 million. Syria remains under robust international economic sanctions; its reconstruction is in a state of inertia.

Over time, the Syrian government managed to regain most of the country back, thanks to a compilation of pro-Assad military forces buttressed by Russia and Iran. However, the war is winding down and Syria’s economy is in dire need of rebuilding. Assad has said the nations that contributed to the defeat of his “terrorist” enemies will be given priority in economic investments and reconstruction, but Iran and Russia alone can’t foot the bill—estimated between $200 to $400 billion—that Syria’s reconstruction requires. Both are struggling to keep their populations satisfied and facing economic troubles of their own. However, there is one country with deep pockets that has shown interest in rebuilding Syria: China.

Historically, Beijing has not considered Syria to be a top foreign policy priority. In fact, Syria is a member of the “Russian camp.” However, with the passing of time and changing conditions on the ground, both Syria and China have sought to improve their ties. Throughout the civil war, China has defended Assad internationally, even when he was accused of the most heinous of crimes. Alongside Russia, Beijing vetoed a United Nations resolution to impose sanctions against Damascus after a UN investigation found the Assad regime guilty of dropping chlorine gas from helicopters on civilians trapped in the northwestern city of Idlib.

On a trip to Damascus, Chinese foreign minister Wang Yi met with government officials including Assad and said that China is against regime change in Syria and is committed to improving the lives of all Syrians. China wants to have a larger say in Middle East affairs—especially in the heart of the Levant region—and wants to secure the business opportunities that Syria’s destruction has created by offering the Assad regime reconstruction aid without political preconditions on matters such as human rights. China is also concerned that Uighur separatists have traveled to Syria to fight alongside Islamist groups seeking to replace Assad with a theocratic government. Reports of Uighur fighters participating in the raging Syrian conflict have had the Syrian Civil War take on new importance in Beijing.

On January 21, 2016, President Xi Jinping spoke in Cairo, Egypt, to the Arab League about how the Middle East is a land of abundance and both China and the Arab world should join hands to maximize the benefits of the Belt and Road Initiative. Critics will argue Beijing’s intentions to embrace Assad will legitimize the latter’s hold on power and permit his continued reign without accountability for the deaths of countless innocent civilians. They are correct in the short term: This is not an ideal situation for Syrians who have suffered a decade of endless killing. However, it may be the single greatest opportunity for ordinary Syrians to salvage their future prosperity. Assad and his top followers are already doing their utmost to bypass the U.S. Caesar Act’s sanctions—which although it was designed to punish the regime and its partners for crimes against the Syrian people, has only further starved the people of the financial and economic assistance they so desperately need to reconstruct their country.

U.S. policymakers have put too much thought into symbolic flexing, while the Chinese have already put a down payment of $2 billion on future economic projects in Syria. When the Covid-19 pandemic hit Syrian hospitals, the Chinese rushed to deliver precious medical equipment. This is what Syrians need right now, not more counterproductive and ineffective sanctions that impress upon Syrians that the West is conspiring against them, which is just the kind of conspiracy that the regime loves to peddle.

China is patiently playing a long game when it comes to improving relations with Syria and the Middle East as a whole. It wants to approach the governments in the region with an open hand of friendship. Nevertheless, if Beijing loses sight of how the local populations feel about their own leaders and how they govern, then, any “positive” relations will be superficial.

It must be clear that no government can survive with violence if it loses popular support among its people. A political solution must be reached that will ensure justice for the victims of this war and long-term stability. With China having a larger say in the Arab world, it can accelerate a demand for Assad to make the necessary concessions in return for greater international protection and finance for his national reconstruction plans. These concessions would most likely be made to pardon opposition figures and combatants, to maintain public order, and provide social cohesion to allow trade to flourish. Will it though? That remains to be seen.