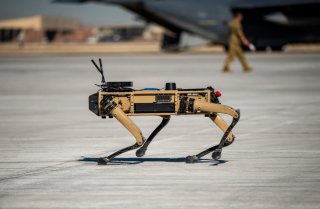 Spot, the yellow robotic dog developed by Boston Dynamics, has been used for all sorts of applications, from construction and cleaning up trash in parks to cheering at baseball games and helping SpaceX contain liquid nitrogen to various law enforcement functions.

Now, Spot is heading to the conflict in Ukraine.

According to Foreign Policy, the U.S. Army is providing one of its two Spot models in order to assist an American nonprofit with mine and ordnance cleanup in Ukraine. HALO Trust, the nonprofit, will send Spot to areas near Kyiv formerly controlled by the Russians.

“Deploying a robotic arm in place of its head, Spot could help drag unexploded munitions—such as cluster bombs—to pits containing other munitions, allowing them to be safely exploded far from civilians in batches of up to 50 to 100 shells, and without endangering any of HALO’s 10 teams that have been deployed in Bucha and Brovary,” the Foreign Policy report said.

Chris Whatley, of HALO Trust, explained to the magazine why Spot is being deployed.

“If you can just move something without endangering a human and move it far enough that you can take it to a place where it can be safely detonated with other items, you move up the curve massively,” he said.

But Spot is not being used as a weapon of war.

Boston Dynamics’ terms and conditions, Foreign Policy said, state that the robot is forbidden “from being weaponized or used for purposes of harm or intimidation.”

This isn’t the first time Spot has assisted in Ukraine. According to CNN, Polish artist Agnieszka Pilat recently teamed up with Spot to create a painting, which was auctioned off to raise money for Ukrainian refugees.

“Right now, power in society is the machine, so I paint portraits of machines and technology,” Pilat said in a recent interview with Artnet. “Muse is a good word… I never used that term before, but it makes so much sense now that you say it.” Spot also assisted her in a series of paintings of modern tech moguls, including Elon Musk, Peter Thiel, and Jeff Bezos.

“If Warhol were alive, I don’t think he’d be painting portraits of celebrities,” she said in the interview.

The interview also noted that the artist has used Spot as something of an artist’s assistant, programming Spot to draw by “dragging oil sticks that she affixed to a 50-pound lode that acts as an arm attached to the robot’s body.”