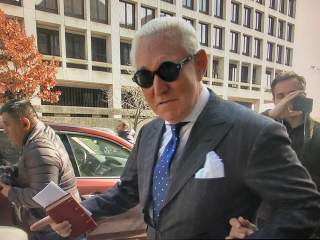 A federal jury in Washington, D.C., on Friday found Roger Stone guilty on multiple charges in a case stemming from the special counsel’s investigation.

Prosecutors relied on three main witnesses to make the case that Stone lied to Congress in order to protect President Donald Trump.

Steven Bannon testified that the Trump campaign believed Stone had contact with WikiLeaks.

Randy Credico denied he was Stone’s back-channel to WikiLeaks. Rick Gates testified that he was present during phone calls that Trump had with Stone regarding the future release of WikiLeaks information.

Prosecutors did not produce evidence that Stone had any contact with WikiLeaks or its founder, Julian Assange.

The special counsel’s team determined that no Trump associates took part in the hacking and dissemination of Democrats’ emails. The report did say members of the campaign were eager for WikiLeaks to release material because they thought it would help Trump.