Romney Stands Up Against Probe Into Hunter Biden and Burisma 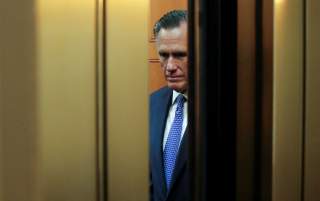 Romney is a member of the Senate Homeland Security and Government Affairs Committee, whose chairman, Johnson, plans to hold a vote on March 11 to subpoena Andrii Telizhenko, a former consultant for a firm that Burisma hired to fight against corruption allegations.

Johnson’s effort to issue the subpoena could be halted if Romney votes against the measure, CNN reported. Republicans hold eight seats on the committee to the six seats held by Democrats.

“There’s no question that the appearance of looking into Burisma and Hunter Biden appears political,” Romney told reporters Thursday when asked about the upcoming subpoena vote. “I think people are tired of these kind of political investigations.”

“I would hope if there is something of significance that needs to be evaluated that would be done perhaps the FBI or some other agency that’s not as political as perhaps a committee of our body,” the Utah senator continued. “We also have a lot of work to do on matters that are not related to Burisma. We probably ought to focus on those things.”

Romney, who was the only Republican lawmaker to vote to convict President Donald Trump on the abuse of power impeachment charge in February, said he would be meeting with Johnson to discuss the merits of his investigation into Burisma.

When asked if he will support Johnson’s subpoena effort, Romney said: “I will make that decision after I’ve had the chance to meet the chairman and see what information he has.”

Romney’s office did not return a request for comment.

Johnson wrote in a letter to Democratic Sen. Gary Peters of Michigan on Monday that his committee has “received U.S. government records indicating that Blue Star sought to leverage Hunter Biden’s role as a board member of Burisma to gain access to, and potentially influence matters at, the State Department.”

Telizhenko, the former Blue Star consultant, has provided some Burisma-related documents to Johnson’s committee, but a non-disclosure agreement is preventing him from handing over any more without being compelled by a subpoena, Johnson told Peters in his letter.