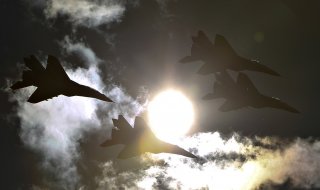 Earlier this month Royal Air Force (RAF) Typhoon fighter jets deployed to Lithuania on a NATO policing mission where jets were scrambled and carried out their first intercept of the operation on Russian military aircraft off the Baltic Coast. The Typhoons took to the skies to intercept a Russian IL-20 COOT Intelligence, Surveillance and Reconnaissance (ISR) aircraft that had been operating over the Baltic Sea.

The RAF pilot from 6 Squadron, attached to the 135 Expeditionary Air Wing (EAW) – who was on Quick Reaction Alert duty when the scramble was called, described the event in an official RAF news report.

"The scramble was called to intercept a Russian IL-20 COOT ISR aircraft," the unnamed pilot said. "The initial scramble was a real shot of adrenaline, but once airborne it was important to remain calm and professional and make the intercept as expeditious as possible to ensure we maintained both the safety and integrity of NATO airspace. This is what all of our training is designed to prepare us for however, at the end of the day it’s just my job."

Russian state media also reported that the IL-20 was escorted by two Russian Su-27 Flanker B fighter jets when the intercept occurred. The Su-27 is a Cold War-era jet fighter that was designed as a direct competitor to the American F-14 and F-15 families of aircraft.

The RAF reported that such intercept missions are part of the routine NATO Air Policing mission that has been conducted to police the skies in the region since 2004. The current RAF mission began on May 1, when the 135 EAW took over the enhanced Air Policing role working alongside the Spanish Air Force detachment at Siauliau Air Base. The RAF – which has deployed about 150 servicemen to Lithuania – and the Spanish Air Force replaced the Belgian Air Component that had been serving in the region over the past few months.

"The UK’s commitment to NATO is as strong as ever," said UK Minister for Armed Forces James Heappey in a statement. "Our Typhoon Force is playing a key part in support of the alliance’s air policing operations and our friends in Lithuania."

The RAF has highlighted its contribution to NATO deployments, which it said supports efforts to reassure its NATO allies to demonstrate that the UK's wider commitment to the security of the region. The Eurofighter Typhoon is a twin-engine, canard-delta wing, multirole fighter that has been in service with the Royal Air Force since September of last year.

"It is great to see all of the training come together in a timely response and a successful NATO Baltic Quick Reaction Alert Air Policing mission," added Wing Commander Stu Gwinnutt, 135 EAW's commanding officer.

However, according to Russia’s assessments, the launch of NATO air patrols in the region territory, which has been free of any military threats, is being seen as the alliance's first steps towards military escalation near Russia's borders in the 21st century.