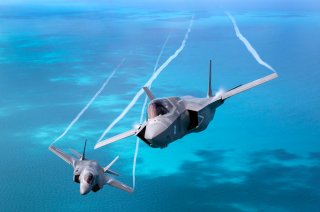 The Royal Air Force’s Chief of the Air Staff Air Chief Marshal, Sir Mike Wigston, believes that transitioning to a “greener” force would help the United Kingdom meet its climate obligations and be a boon to military logistics.

Speaking at Kings College London, Wigston emphasized that although the current government has committed to net-zero greenhouse gas emissions by 2050, he is pushing the Royal Air Force to meet that target a decade earlier “because everything I see and hear tells me that we need to get ahead on this now,” Wigston explained.

If fuel supply chains on land are a headache, then they are a migraine at sea. There is one solution that could remedy fuel resupply though: generate your own synthetic fuel while underway and forgo ports stops or replenishment at sea.

“I can already point to significant benefits of a more sustainable force structure, whether operating from home base, or deployed,” Wingston said. “Renewable power generation like solar or small hydrogen power units removes the requirement for a massive fuel and logistics supply tail and the vulnerability and headaches that attracts.”

While the Royal Navy pales in comparison to its American counterpart, the United Kingdom nonetheless operates a pair of large aircraft carriers, the HMS Queen Elizabeth and the HMS Prince of Wales. The Queen Elizabeth-class carriers are three times larger than the preceding Invincible-class carriers, and unlike United States Navy carriers, they rely on gas turbine and diesel engines for propulsion, underscoring the Royal Navy’s dual-natured fuel vulnerability—for planes and ship alike.

“And taking it one step further, just imagine if the synthetic fuel plant I described earlier, could be deployable too, and we were able to make our own jet fuel at a deployed operating base or at sea as part of HMS Queen Elizabeth’s carrier strike group,” Wingston said.

An organic fuel generation capability would offer the Royal Navy a huge logistics advantage and significantly expand the amount of time ships could spend on station. For the Fleet Air Arm—the Royal Navy’s air power at sea—forgoing fuel replenishment at sea would be transformative.