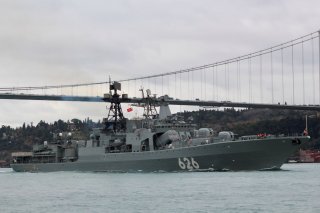 The Royal Navy’s Portsmouth-based Type 23 frigate HMS Westminster and patrol ship HMS Tyne shadowed a Russian destroyer in the English Channel. The two British warships monitored the passage of the Russian Vice-Admiral Kulakov, a Udaloy-class destroyer that was named for Soviet naval officer Nikolai Kulakov, as it passed through the channel.

“The Royal Navy routinely monitors the passage of warships through the UK’s area of interest as part of its ongoing mission to support the defence of the UK,” said Commander Will Paston, commanding officer of HMS Westminster. “The Vice Admiral Kulakov conducted itself in a safe and professional manner throughout its transit.”

The Russian warship, which was commissioned in December 1981, and served in the Russian Northern Fleet until March 1991, underwent repairs and upgrades that lasted more than eighteen years. Vice-Admiral Kulakov returned to active duty in 2011. The warship took part in drills involving underwater special forces and the shelling of a notional enemy position last year during its Tsentr 2019 exercises.

Interestingly, just as the Vice-Admiral Kulakov underwent a significant upgrade, so too did HMS Westminster, which also returned to service after one of the longest, most comprehensive and complex revamps in her lifespan. The Royal Navy’s warship entered extended refit in Portsmouth in November 2014 and only returned to sea in January 2017 with a new principal weapon system, Sea Ceptor, which replaced the Seawolf. In addition, the British vessel received Radar Type 997 along with numerous modifications and alterations that increased her accommodation and working spaces.

While shadowing the Russian warship, HMS Westminster was supported by her embarked Merlin helicopter from Culdrose-based 814 Naval Air Squadron. According to Great Britain’s Ministry of Defence, sailors and aircrew monitored every movement of the Russian ship using state-of-the-art radar, surveillance cameras and sensors—which allowed them to track the Vice-Admiral Kulakov’s course and speed as it passed the British Isles.

“Once again the Royal Navy has proven its ability to maintain the sovereignty of the United Kingdom territorial waters,” said Minister for the Armed Forces James Heapey. “I am hugely impressed by the professional way the sailors of HMS Westminster and Tyne have responded.”

Russian warships have been monitored in the English Channel in recent months. In April, seven Russian vessels had “lingered” in the channel and were closely monitored by nine Royal Navy warships including multiple Type 23 frigates; while in May the French Navy also tracked the movements of Russian vessels—including the auxiliary vessel RFS AkademikPashin, which was believed to be a spy ship.