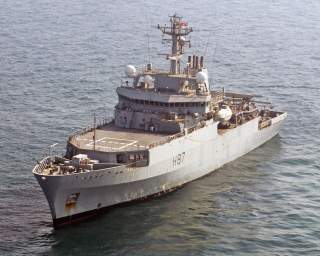 The ship the British Royal Navy deployed to the Black Sea in order to send a message to Russia lacks heavy weaponry and could not defend itself from intensive attack.

HMS Echo, a 297-feet-long survey vessel, arrived in Ukrainian waters in early December 2018. "As long as Ukraine faces Russian hostilities, it will find a steadfast partner in the United Kingdom," stated Gavin Williamson, the U.K. minister of defense.

"Russian forces have been working to make the Azov Sea an internal Russian body of water in order to both cut off Ukraine’s eastern ports and cement Moscow’s hold on Crimea," explained Damon Wilson, executive vice president of the Atlantic Council think tank.

But Echo is a science vessel, not a front-line warship. Her main mission is to map the seafloor. Her armament -- two 20-millimeter cannons plus a few machine guns -- is strictly defensive.

Echo is more lightly armed even than are the two Ukrainian navy gunboats that Russian forces seized in the Kerch Strait on Nov. 25, 2018. Russian boats blocked the Ukrainian ships' passage through the strait while Russian attack planes and helicopters flew overhead.

Russian commandos boarded the Ukrainian gunboats and an accompanying tugboat and arrested their crews. The 24 Ukrainian sailors are still in Russian custody and could face long-term imprisonment.

When the destroyer HMS Duncan deployed to the Black Sea in early 2018, she was subject to a show of force by Russian forces that her captain described as unprecedented. First, a Russian destroyer shadowed the 500-feet-long Duncan. Later, 17 Su-24 bombers and Su-35 fighters approached the ship.

Their pilots ignored Duncan's hails as they maneuvered near the vessel. "HMS Duncan is probably the only maritime asset that has seen a raid of that magnitude in the last 25 years," British commodore Mike Utley said.

Unlike Echo, Duncan can defend herself. She boasts sophisticated sensors and a missile armament including Aster surface-to-air missiles and Harpoon anti-ship missiles.

But powerful warships such as Duncan are in short supply in the United Kingdom. After decades of deepening defense cuts, the Royal Navy possesses just 19 destroyers and frigates. Only a few of them are deployable at any given time.

London's new defense strategy, released in December 2018, promised to maintain the fleet but not expand it.

The mismatch between the West's political resolve and the escalating Russian threat often results in hollow shows of force. On Dec. 6, 2018, the U.S. Air Force deployed one of its OC-135 observation planes to Ukraine at Kiev's request. "The timing of this flight is intended to reaffirm U.S. commitment to Ukraine and other partner nations," the Pentagon stated.

In fact, the OC-135 flew a comfortable flightpath deep inside Ukraine, carefully avoiding Russian and Russian-backed forces along Ukraine's border with Crimea and in the country's eastern Donbass region.

"They didn't fly over any contested areas," Steffan Watkins, an independent security expert and imagery analyst, told The National Interest. "I speculate it was a training flight that was lipstick-on-a-pig'd up to tell the public they were 'sending a message.'"

Echo's deployment is equally limp as a show of force. But London vowed to do more. The Ministry of Defense announced that personnel from the Royal Navy, Royal Marines and the British Army would deploy to Ukraine in January and February 2019 in order to help train Ukrainian troops.

"As we fight to defend our territory, the offer of extended support from the U.K. armed forces is vitally important and gratefully received," Ukrainian defense minister Stepan Poltorak stated.