The Royal Navy Wants Robotic Submarines (Here's Why That Matters) 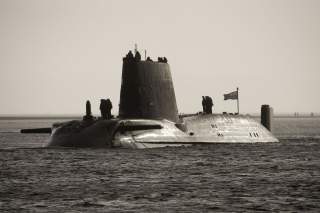 The U.K. Ministry of Defense in April 2019 launched a $3.3-million competition to begin developing a large, robotic submarine.

The XLUUV leaves its dock and autonomously, and covertly, transits underwater to the maritime operational area. It positions in the operational area either at or below periscope depth, and monitors traffic for up to three months; above water electronic, underwater acoustic and optical intelligence gathering using a range of sensors. It may position on the seafloor and release a tethered sensor to periscope depth that would then be recovered before returning to periscope depth. During this period a reportable incident occurs, in this case the passing of a vessel of interest, whereby the XLUUV reports the incident to control and continues monitoring.

The XLUUV leaves its dock in the harbour and autonomously, and covertly, transits underwater to the checkpoint. Upon reaching the checkpoint, the XLUUV proceeds to patrol a pre-determined area for up to three months. During this period it encounters (recognizes the acoustic signature of) a target of interest, and identifies it as hostile. Upon identification, it covertly reports the incident to control, before returning to station and continuing the patrol. Alternatively, upon reporting the incident to control, the XLUUV could be re-tasked.

The XLUUV leaves harbour and autonomously, and covertly, transits to just outside the operational area, rising to periscope depth to await signal. A ‘go code’ is transmitted from control; the XLUUV dives to operation depth and transits to operational area before dropping the payload on the seabed. The XLUUV exits the operational area, rises to periscope depth, and transmits a ‘complete code’ before autonomously, and covertly, returning to harbour or holding area. At a later date, an XLUUV is tasked with covertly recovering the sensor payload from the seabed.

"The 51-foot-long submersible is launched from a pier and can operate autonomously while sailing up to 6,500 nautical miles without being connected to a manned mother ship, according to the Navy," Ben Werner explained at USNI News.

The U.S. Navy has ordered several Orcas against a requirement for nine of the robo-subs through 2024.

"Eventually, the Navy could … use the Orca XLUUV for mine countermeasures, anti-submarine warfare, anti-surface warfare, electronic warfare and strike missions," according to a U.S. Navy outline of the system’s capability development.

The U.S. Navy is retiring old nuclear-powered attack submarines as their reactor cores wear out, and at a rate that’s faster than the fleet can afford to buy new submarines. Owing to the gap between decommissionings and commissionings, the U.S. undersea fleet slowly is shrinking from around 51 in 2019 to a projected low of 42 in 2028.

The Royal Navy’s own sub fleet also has declined, from a post-Cold War peak of 12 vessels to just seven once all the new Astute-class subs commission. An XLUUV could relieve the Astutes on the most tedious missions, allowing the manned vessels to spend more time, say, hunting Russian ships on the high seas.