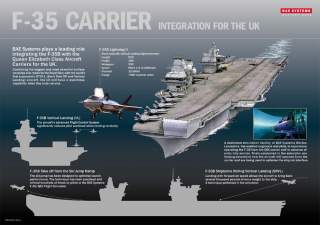 The United Kingdom’s new defense secretary has signalled that the Royal Navy at all times will operate at least one fully combat-capable aircraft carrier.

Penny Mordaunt took over after Prime Minister Theresa May in early May 2019 fired former defense secretary Gavin Williamson for allegedly leaking sensitive information to the press. Mordaunt on May 15, 2019 announced the Ministry of Defense would develop a new “National Carrier Policy.”

“We will have one carrier available at very high readiness at all times,” Mordaunt said.

The Royal Navy is building up a fleet of two, 70,000-ton-displacement carriers. HMS Queen Elizabeth commissioned in December 2017. Sister ship Prince of Wales is fitting out for commissioning as early as 2019. Queen Elizabeth could deploy with Royal Air Force F-35B stealth fighters starting in 2020.

Together, the flattops cost around $10 billion to develop and build.

“Nothing symbolises our intent and ambition for global Britain and has captured the hearts of our citizens more than our new carriers,” Mordaunt said. “Nine acres of sovereign territory that will give us the ability to project power from anywhere in the world.”

“And when Prince of Wales joins [Queen Elizabeth] in the fleet in the near future … we will have one carrier available at very high readiness at all times,” the defense secretary added. “And this will match our strategic nuclear deterrent with a conventional one. I want to make sure that we make the most of this incredible sovereign capability.”

Money as always is a problem. The U.K. armed forces have struggled in recent years to maintain the pool of forces from which the task force and at-sea deterrence would draw. Periodic cuts since the fall of the Soviet Union in 1991 have shrunk the British military roughly by half.

The army recently announced it would upgrade only 148 of its 227 Challenger 2 tanks.

British military spending has stabilized at around $55 billion annually, thanks in part to a transfer of funds from the $13-billion reserve account for the navy’s four new Dreadnought-class ballistic-missile submarines.

But even $55 billion a year might not be enough to maintain both carriers and their aircraft plus a robust fleet of naval surface combatants that, among other missions, escort the carriers during wartime.

Buying new aircraft carriers instead of frigates and destroyers was a “bad idea,” the Lord Houghton of Richmond, former chief of the defense staff, in May 2019 told a House of Commons committee.

The carriers were “affordable only to the detriment of the surface fleet,” Lord Houghton said, according to The Telegraph.

Giving evidence to the National Security Strategy committee, Lord Houghton said that as vice chief of the defense staff in 2010 he was not in favor of buying two aircraft carriers and new F-35 stealth jets for the air force whilst also expecting the defense budget to include the nuclear deterrent submarines.

Spending on such expensive equipment “massively unbalances the amount of money to spend on capabilities in more active need of use,” he said.

Mordaunt for her part said she was “not going to be shy about asking for more money” to keep the carriers afloat while also buying at least 13 new frigates to replace older ships.