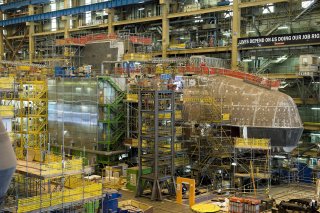 The Royal Navy's Astute-class of nuclear-powered submarines have been described as the "most capable ever built," and with a £1.6billion price tag for each boat, the ships need to live up to the bold promise. Fittingly, the latest has a name that is more than fitting: HMS Audacious.

The 320-foot long submarine can reportedly glide through the water with no more noise than a baby dolphin, thanks its state-of-the-art anti-acoustic tiles, while its sonar system can detect objects from 3,000 nautical miles away – the distance between the English Channel and New York City.

Its nuclear reactor, which has a 25-year life, can be used to recycle air and water, which allows the boat to circumnavigate the globe without surfacing. As with the other Astute-class boats, HMS Audacious can also deploy Special Boat Service teams – which operate in a manner similar to U.S. Navy SEALS – while submerged.

The attack submarine is armed with Spearfish torpedoes to deal with enemy subs and warships, while Tomahawk cruise missiles can target land-based threats up to 1,000 miles away.

The boat set sail this month on her maiden voyage from BEA Systems – which built the new submarine – at Barrow-in-Furness close to her homeport at the Her Magesty's Naval Base Clyde. Welcoming the vessel were members of the Submarine Flotilla, or SUBFLOT, which is based in Clyde.

"The departure of HMS Audacious from Barrow is a milestone in the Astute-class programme," said Ian Booth, head of the Submarine Delivery Agency in a statement. "The delivery of our incredibly complex submarine programmes depends on the skilled workforce and close collaboration with our industrial partners to deliver a first-class product for the Royal Navy."

HMS Audacious is the fourth Astute-class sub completed out of a planned seven boats, and its primary role with SUBFLOT will be to assist in combating the increasing threat of Russian incursions in waters near the British Isles. The Astute-class is the replacement for the Trafalgar­-class fleet submarines that first entered service in the early 1980s. The first three submarines, HMS Astute, HMS Ambush and HMS Artful are in service, while the final three Astute-class are now at various stages of construction at Barrow.

The timetable of the delivery of the final three has been impacted by the coronavirus outbreak in the UK.

"This is an incredibly difficult time for employees, their families and the community but, as is often the case in times of great adversity, it has been truly humbling to see everyone come together to support the government's critical defence programmes and help deliver HMS Audacious," said Cliff Robson, managing director of BAE Systems Submarines.

A total of six Royal Navy vessels have been named HMS Audacious, beginning with the 74-gun 3rd rate ship-of-the-line, which was in service from 1785 to 1815. A King George V-class battleship was also named HMS Audacious, and it was sunk by a mine in October 1914 during the early months of the First World War. The HMS Eagle, a post-World War II aircraft carrier, was briefly named Audacious.