Is the Ruger Mark IV the Best Pistol for Shooting Competitions? 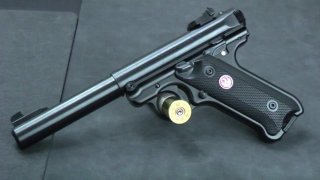 It’s classic. It’s an icon. It was one of the first guns I’ve fired in my life. The Ruger Mark IV is a pistol that everyone has seen and most have fired. It’s a .22 caliber gun so it was introduced to more than a few people when they were kids. I must have been in middle school when my uncle rented the Ruger Mark III in 2004. I have fond memories of that time so I wanted to know if the Ruger Mark IV is as good as it is in my memories.

The Mark IV is a remarkably good-looking pistol that rocks a vintage shape and a plethora of modernized features. It feels fantastic in the hands too. My model, the “Target” variant, has a stainless steel frame with wooden grips. Features like the safety and slide release have been modernized for dramatically better ergonomics. The absolute best change is the takedown procedure though. Older models had a system that was unintuitive and a real pain, but now that’s all been moved to a single button. Ruger has successfully eliminated the biggest issue around the Mark series.

Everything else is as good as ever. Shooting this pistol is phenomenal, but that just might be my love of .22s speaking. The trigger definitely helps. You can expect a super clean trigger break that makes it super easy to hit follow-up shots. The only problem is that the trigger is a smidge heavier than I like at four pounds. That’s a minor complaint and it was essentially a nonissue for me. Outside of that this pistol is an amazing target-shooter and has quickly become my favorite plinker, especially since I’m not clearing jams every other magazine.

I don’t use .22s for anything outside of range day, but fixing malfunctions isn’t particularly appealing when I’m trying to have fun. Luckily, the Ruger Mark IV can run just about anything as far as I’m concerned. I used fairly cheap bulk ammo for the majority of my mags. I didn’t have a single issue. It feels good when a gun works the way it should straight out of the box.

Accuracy is something I was especially impressed by. I’m not a competitive shooter l, but I sure felt like one using this handgun. Nailing targets is almost too easy, especially at twenty-five yards and under, but push it a little further out and you will see the Mark IV outshine its competition. six-inch targets out at fifty yards were hard to hit but definitely attainable after a few arm up shots.

Honestly, it’s hard to find things to dislike about the Ruger Mark IV. It’s just too much fun. The only drawback is the price at $920 is steep for a .22 pistol. Other models can be found for under $500 and would be a great jumping-off point for someone just getting into plinking pistols.