Is Ruger's SR22 Pistol the Jack-Of-All-Trades of Guns? 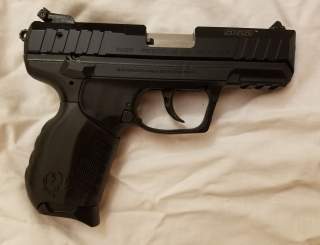 One of the major advantages of the SR22 is a focus on ergonomics.

The field of rimfire pistols is a crowded one, with a large variety of pistols to choose from. The Ruger SR22 pistol manages to stand out by combining a modern look with versatility to match the user, from the ability to customize the pistol’s ergonomics to the installation of threaded barrels. The result is a pistol at home with target shooters or home defense enthusiasts alike, and an excellent training pistol, especially for younger shooters.

Ruger is no stranger to the rimfire market, having produced the Ruger Mark IV target pistol and the 10/22 semiautomatic rifle for decades. The absence of a do-everything .22 LR pistol was a conspicuous hole in the company’s product lineup until 2012, when Ruger introduced the SR22 at the annual SHOT Show in Las Vegas, Nevada. The SR22 is based on the Ruger LCP double action pocket pistol, using the same hammer-fired fire control system.

The SR22 is both a single and double-action pistol, with a rounded hammer for single action cocking. This dramatically reduces trigger pull and makes it more accurate for aimed shots. The hammer is both skeletonized and has a rounded spur for reduced weight and ease of operation. The relatively low recoil and force of the .22 round makes the use of an aluminum slide possible, matched with a polymer frame. The barrel itself is stainless steel. This reduces overall weight to just 17.5 ounces, or just over a pound.

One of the major advantages of the SR22 is a focus on ergonomics. The SR22’s aluminum slide is machined with serrations to ensure a positive grip when chambering the first round. The weapon has a fully ambidextrous safety/manual decocking lever and ambidextrous magazine release, making it comfortable for both left and right handed shooters. Ruger’s rimfire pistol also has two interchangeable rubberized grips for adjusting palm swell size, allowing it to adapt to shooters with smaller or larger hands.

The SR22’s stainless steel barrel is available in both threaded and non-threaded versions, and is easily replaceable by the user. This allows the use of a muzzle brake or compensator for competition use, but also the use of a suppressor for an overall reduction in firing noise. The SR22 is available in two barrel lengths, 3.5 inches and 4.5 inches.

The SR22 also has a number of safety features to enhance overall operating safety. The pistol has a manual safety and decocking lever, giving the user the ability to restrict the pistol from firing and bringing down the internal firing system without discharging the weapon. The weapon also has a loaded chamber indicator allowing the user to tell at a glance whether or not a live round is in the chamber.

Users aim the SR22 using the built-in three dot sighting system, allowing quick pick up even in low light situations. The front blade sight has a single white dot while the rear sights have two white dots and are user-reversible to utilize a single black blade. The rear sights are adjustable for elevation and windage. The handgun also has a Picatinny rail located in front of the trigger well running beneath the barrel to the muzzle. This U.S. military-standard rail allows for the installation of laser aiming devices or flashlight attachments for night or indoor use.

The SR22 comes with two ten-round magazines and accepts all manner of .22 Long Rifle ammunition. A typical Remington 40 grain Golden Bullet round has a muzzle velocity of 1, 255 feet per second at the muzzle, with a muzzle energy of 131 foot-pounds. At 100 yards, the bullet drops 5.5 inches in elevation while muzzle energy drops to 92 foot-pounds. Recoil is negligible, especially compared to larger caliber handguns. The result is an excellent introductory pistol for shooters that can also demonstrate the effects of wind and reduced muzzle energy, two important factors key to understanding longer range shooting.

The SR22 is a well balanced rimfire pistol that can do a little bit of everything, from target shooting at the range to light hunting and even home defense. Lightweight and inexpensive to shoot, it is an excellent training handgun for first time shooters. The SR22’s versatility and ease of use makes it a candidate for room in any gun enthusiast’s safe.