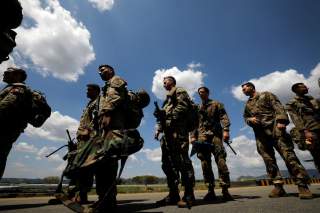 Members of the military who have long been barred by law from collecting damages from the federal government for injuries off the battlefield will finally be able to do so after Congress stepped in to amend the law.

The legislation represents progress for injured service members – but still limits who among them may press for damages.

Up until the end of World War II, the U.S. government enjoyed “sovereign immunity,” a vestige of British rule when “the king could do no wrong” and the government could not be sued.

But in 1946, faced with the prospect of World War II veterans returning from the front only to be hit and killed in an accident on base, Congress enacted the Federal Tort Claims Act. Congress felt that it was only fair to allow people to recover damages for personal injury from the government when the government was negligent or irresponsible about caring for people’s safety.

There were exceptions. Certainly Congress could not allow a soldier – or his family – to sue the government if, due to the orders of a superior officer, he were wounded or killed in battle. So the Federal Tort Claims Act prohibited suits by soldiers or sailors injured due to wartime combatant activities.

But later rulings limited servicemembers’ rights even more, in ways not suggested by the language of the act.

The first of these was a case filed by the surviving family members of a soldier. Lt. Rudolph Feres was a decorated World War II veteran who had parachuted into Normandy on D-Day. He survived that battle and others through the end of the war only to return to the U.S. and die in a barracks fire caused, according to his wife, by the explosion of a boiler known to be faulty.

Feres’ widow also claimed that no fire guard had been posted on the fateful night. Joined to the case were two soldiers who claimed malpractice by army surgeons.

The court decided that the existing benefits scheme for military deaths and injuries was ample and denied the claims. To the further chagrin of the Feres family, the controversial ruling took on the name the “Feres Doctrine.”

Cases sustaining Feres expressed the concern that allowing civilian courts to intervene in cases of this type would interfere with military discipline. Thus, the court declared that soldiers could not sue the government for damages for negligently caused injuries “incident to service,” even if they did not involve combat.

Later suits building on Feres limited soldiers’ rights even more – barring claims by a soldier allegedly raped by her drill sergeant and by members of the military harmed by their exposure to nuclear testing and the defoliant chemical Agent Orange.

All of these rulings meant that anyone who had the misfortune of getting hurt while on active duty, even if it wasn’t in combat, could never sue for damages – while if the same person had gotten hurt on the job as a civilian, they would have had that right.

This disfavored treatment for servicemen was underscored in the aftermath of the space shuttle Challenger explosion, during which families of civilian crew members were able to file lawsuits against the government, but the family of the pilot who was a Navy captain on active duty could not.

The Feres Doctrine were therefore seen by many as unfair. Others, like the late Supreme Court Justice Antonin Scalia, criticized Feres because of its departure from the plain language of the Federal Tort Claims Act, which limits the exclusion to wartime “combatant activities.” Still others believe that Feres fails to hold the military accountable for the kind of mistakes for which others are required to pay damages.

The Feres Doctrine nevertheless has continued to hold sway, with the Supreme Court refusing to reconsider the doctrine as recently as May 2019. Justice Clarence Thomas, in a dissent from the court’s denial of certiorari in that case, Daniel v. United States, paraphrased Justice Scalia in stating that “Feres was wrongly decided and heartily deserves the widespread, almost universal criticism it has received.”

In 1950, speaking for the Supreme Court in the Feres case, Justice Robert Jackson admitted, “If we misinterpret the Act, at least Congress possesses a ready remedy.” That “ready remedy” finally came almost seventy years later, due to the persistence of a soldier suffering from terminal cancer.

Sergeant First Class Richard Stayskal is a former Green Beret and wounded Iraq veteran whose military health providers missed a 3-centimeter mass in one of his lungs on a CT scan.

After military physicians repeatedly attributed his health problems to asthma or pneumonia, Sgt. Stayskal learned from a civilian pulmonologist that he actually had stage 4 lung cancer. Sgt. Stayskal continues to receive treatment for his cancer, although he says it is deemed incurable.

But Sgt. Stayskal was barred by Feres from pursuing a malpractice case in court.

So Stayskal enlisted the support of California Congresswoman Jackie Speier, a Democrat, who introduced a bill to allow current and former service personnel to bring medical malpractice claims against government health providers.

A compromise version of the bill was incorporated into the National Defense Authorization Act for fiscal year 2020. Adding the bill into a “must-pass” piece of defense legislation assured its passage. It was passed by both houses of Congress with overwhelming bipartisan support. President Trump signed the measure into law on Dec. 20, 2019.

The new law does not cover everyone. A lawsuit like the original Feres case, by the survivors of someone who perished in a barracks fire, would still not be allowed. That’s because the legislation only allows claims by those who allege to have been victims of medical malpractice by military health care providers.

And claims cannot be brought in federal court, as is normally the case under the Federal Tort Claims Act. Rather, they must be pursued through a Defense Department administrative procedure under regulations that the Department of Defense is required to draft.

Research suggests that most claimants don’t care whether their cases are decided through a court, an administrative procedure or even mediation. Rather, they care about having a respectful hearing in which a third party has carefully considered their views, concerns and evidence.

Those who worked to pass this legislation will likely scrutinize the Defense Department’s regulations and procedures to see whether such a forum has been provided.