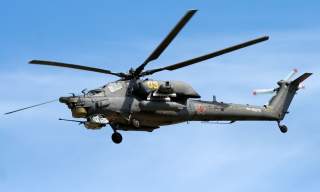 Russia’s upcoming Mi-28NM attack helicopter is being tested with an upgraded engine. “The safety, functionality and flight characteristics of the combat helicopter have been considerably increased by furnishing the VK-2500P [engine] with the upgraded automated control system,” announced the Rostec Corporation press office.

The Mi-28NM “Night Hunter” is a modernization of the Mil Mi-28, NATO reporting name “Havoc,” a staple Soviet attack helicopter in use since the early 1980s. The original Mi-28’s prolific operational history extends all the way to Russia’s involvement in the Syrian Civil War, where a host of technical problems with its onboard electronic systems and engine performance were laid bare.

The original Mi-28 has seen several variants over the past few decades, including a daylight Mi-28D and all-weather Mi-28N. Whereas previous iterations involved minor adaptability changes, the Mi-28NM is a comprehensive redesign intended to serve as Russia’s flagship attack helicopter for the foreseeable future. “Innovative technologies and solutions implemented in the design of that helicopter, not only just improved its characteristics, but also made Mi-28NM an almost perfect combat vehicle,” General Director of “Helicopter Holding Russia” Alexander Mikheyev announced.

Manufacturing of the Mi-28NM began in 2008, and the latest prototype was prominently displayed at Russia’s “Army 2018” military exhibition. The Mi-28NM’s Army 2018 debut was largely to demonstrate its formidable Khrisantema-V anti-tank guided missile system, which builds on older Khrizantema (“Chrysanthemum”) models with improved target acquisition technology. The Mi-28NM previously used a VK-2500 engine, which was itself a replacement for the Ukrainian-made TV3-117VMA housed in the original Mi-28.

It is not difficult to see why the Russian Air Force (VKS) would want to upgrade the aging TV3-117VMA to accommodate the Mi-28NM’s new precision-guided weapons system and faster maximum speed. Less apparent is the reason for the recent jump from the VK-2500 to VK-2500P. Was the VK-2500 initially intended as an intermediate solution while the more powerful 2500P is in development, or did the manufacturer discover somewhere along the way that a different engine is needed to meet the 28NM’s design parameters?

Rostec Executive Director Oleg Yevtushenko announced that the “new engine and its ‘digital filling’ considerably increase the ‘Night Hunter’s’ performance characteristics and make it one of the best in the world in its class,” but raw performance differences between the 2500 and 2500P are relatively minor. The VK-2500P goes up to 2800 hp (horsepower) in emergency power mode and 2500 hp in regular take-off regime, as compared with the 2700 and 2400 hp of the VK-2500.

Then what, if not significant performance gains, can explain the move to a different engine? Long-term financial considerations. The VK-2500P boasts a significantly longer run time before the first major maintenance at 3,000 engine cycle hours, versus the 2,000 hours of the VK-2500. It likewise offers a service life of 12,000 cycle hours, while the VK-2500 only reaches 9,000.

Transitioning to a more efficient Mi-28NM engine with a less frequent maintenance schedule and longer service life will almost certainly cut costs, especially if the Russian Air Force plans to use the VK-2500P for other military helicopters as it continues to modernize its roster.

In the likely case that the Mi-28NM will become be an export product in the coming years, a more efficient engine is a clear selling point for foreign buyers. Over the past decade, older variants of the original Mil Mi-28 were sold to Venezuela, Algeria, and Iraq.