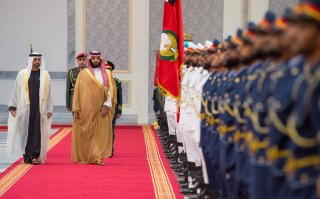 Qatar is no different. Much as Doha recognizes the symbolic value of purchasing Western arms—it spent billions buying Italian warships shortly after it was isolated in 2017 and formally requested to buy the U.S. F-35 stealth fighter after it was offered to the UAE in 2020—Qatari officials also appreciate the value of international reputation and soft power. Consequently, Qatar’s new MNNA designation is a victory for Doha’s efforts to be seen as a consequential and modern state, an objective that also elucidates Doha’s decision to spend $200 billion in preparation for international spectacles like the 2022 World Cup. The World Cup “is make or break for Qatar,” Geoffrey Kemp, senior director for Regional Security Programs at the Center for the National Interest, told me. “It’s enormously prestigious … and to some extent [improving their public image] is the driving force between all the major decisions Qatar is making.”

Yet Qatar’s decision to host the world’s biggest tournament for the world’s most popular sport not only stands to benefit its image; it could also yield geopolitical dividends by advancing the Arab Gulf’s nascent rapprochement as well as Saudi Arabian and Iranian de-escalation. Years of counterproductive, violent competition and concerns about U.S. retrenchment and the coronavirus pandemic have led the Gulf states to pivot towards cooperation on shared security challenges. Given Qatar’s unique position—it hosts the United States’ preeminent military facility at Al Udeid Air Base; maintains ties with various U.S. adversaries like Hamas and the Taliban; and shares Persian Gulf gas reserves with Iran—Doha is certain to remain an influential regional player.