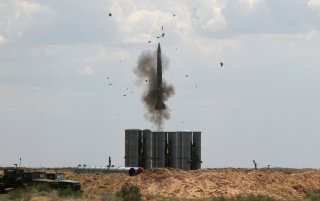 Road-mobile missile carriers are a Russian military hallmark. The large transporters can be seen both on Red Square, during Russia’s May 9th Victory Day parades, and in are in service with a number of post-Soviet militaries. Such vehicles have a mobility advantage over silo-based missiles, although clearly not as protected as their silo-based counterparts.

According to the Center for International and Strategic Studies, Russia’s Soviet-inherited missile collection is the largest in the world by number and kind. Russia “remains a major power in the development of missiles of all kinds, and Russian strategic rocket forces constitute a significant element of Moscow’s military strategy…from anti-access/area denial in local conflicts to delivery of strategic nuclear weapons across continents.”

In addition to missiles based in the Russian mainland, the semi-exclave Kaliningrad also hosts several missiles that threaten parts of Poland, Sweden, Germany, Belarus, Ukraine, Lithuania, and Latvia. Russia has the ability to choke off parts of the Baltic Sea with it’s Kaliningrad-based arsenal.

Russia maintains several versions of the Scarab/Tochka missile. The missile system was first designed and fielded in 1975 and was designed to give battlefield commanders a range of flexible options on the battlefield. In addition to standard high-explosive, the Scarab/Tochka missile can be equipped with anti-tank, anti-personnel, anti-runway, or anti-radar warheads. A tactical nuclear warhead version also exists and is believed to have an adjustable nuclear yield of either 10 or 100 kilotons.

The transporter used for the missile system is amphibious and is capable of both off-road driving and deep water fording. The vehicle is quickly prepared for launch in just 16 minutes, has a two-minute launch sequence, and takes approximately 20 minutes to reload. It also has a filtration system that protects the three-man crew against nuclear, biological, and chemical threats.

The Iskander is slowly replacing the Scarab/Tochka missile platform. It has a slightly improved range and a larger warhead. The missile trajectory is more depressed than the Scarab/Tochka system, and use a mix of GLONASS, inertial, and terrain-following radar for guidance. It is highly accurate, with a circular probably error between five and ten meters, or about 16 to 32 feet.

Iskanders come in groups of two: the transporter they ride on is also amphibious. Along with NCB protection for the cabin crew, the launcher roof is armored and offers better protection to its missile cargo than preceding transporter systems.

Iskander and variants are routinely deployed to Kaliningrad to coerce countries in the region. Since 2018, a number of Iskander variants have been permanently stationed in Russia’s exclave.

The SS-N-26 family comes in air-sea-and land-based variants. The land-based Yakhont has successfully been exported to Indonesia and Vietnam, and Syria has also purchased a number of transporters and missiles, although the majority of those were destroyed by an Israeli airstrike in 2013.

Russia and India partnered on the BrahMos missile, which is similar to the export-version Yakhont.

Russian missiles and launchers were inherited from the Soviet Union, like most of Russia’s military equipment. Their missiles are no exception, and although somewhat old, the road-mobile launchers, especially those in Kaliningrad, could be used to choke off access to the Baltic Sea in case of a conflict in Europe.