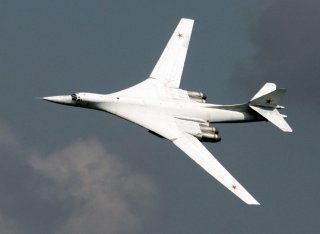 As part of the Russian Air Force’s Long Range Aviation branch, efforts have been made to keep the active fleet flying. Upgrades to its electronics system and other modernization efforts have been ongoing since the early 2000s, and in 2015, Moscow announced plans to resume production of an upgraded version of the White Swan.

The first of those new production models has reportedly performed its debut flight.

“On January 12, the first newly-built Tu-160M strategic missile-carrying bomber performed its debut flight from the aerodrome of the Kazan Aviation Enterprise, a subsidiary of the Tupolev Company [part of the United Aircraft Corporation within Rostec],” the press office of the state technology corporation Rostec announced according to a report from Tass.

The newly-built strategic bomber performed its maiden flight, which lasted about thirty minutes, at an altitude of 600 meters. During the flight, the crew was able to inspect the aircraft during various aerial maneuvers.

The Tu-160M retains many of the design elements of the original aircraft, but features numerous advancements and new hardware. It remains the largest and heaviest Mach 2+ supersonic military aircraft ever built and is second in overall length to the experimental XB-70 Valkyrie.

The upgraded White Swan, which remains outwardly similar to the American Rockwell B-1 Lancer, will reportedly be able to carry new emerging weapons.

“Today we see considerable prospects for the Tu-160 platform: its further development will make it possible to use it for new, including breakthrough weapons,” explained Russian Industry and Trade Minister Denis Manturov.

The Tu-160M is now designated to strike enemy targets in remote areas with nuclear and conventional weapons. Whereas the U.S. Air Force’s B-1 is a bomber in the classical sense—meaning it flies to targets to deploy its bomb load—the Tu-160 was developed to operate as a stand-off weapons platform, where missiles would be launched from its bomb bay doors.

After deploying its weapons load, the “White Swan” would speed off at Mach 2+. The White Swan was also the only Soviet-designed bomber not to carry any defensive weapons, which is why even today it is routinely escorted in patrol missions by fighter aircraft such as the MiG-31.

Moscow has strived to tout the long-range capabilities of the Tu-160, and in September 2020 two crews onboard one of the bombers broke a record for the longest non-stop flight for the aircraft. It was in the air for more than twenty-five hours, and covered a distance of more than 20,000 kilometers. Perhaps Russia will seek to best its record with a new model Tu-160.