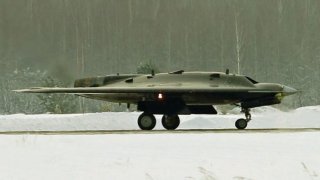 The Russian Ministry of Defense published a short video on YouTube that showed its new Okhotnik (Hunter) drone taking part in a test flight at a military airfield this past weekend. The timing of the release of the new twenty-minute video coincides with an announcement on Monday that serial deliveries of the latest stealth heavy strike drone to Russian troops will begin in 2024.

“We received an assignment from the Defense Ministry to speed up the experimental design work and maximally adjust the schedule in order to begin the deliveries already from 2024,” United Aircraft Corporation (UAC) Head Yuri Slyusar said in a report to Russian president Vladimir Putin according to Russian state media. “That is why we are actively working with colleagues on this issue.”

The Okhotnik, which was developed by Sukhoi Aircraft Company, is a large flying-wing style unmanned combat air vehicle—“Strike Reconnaissance Unmanned Complex” in Russian nomenclature. It features stealth technology that includes anti-radar coating, and it is powered by a jet engine that can propel it to a top speed of 620 miles per hour. The drone is equipped with surveillance equipment that includes electro-optical and radar.

The remote-controlled Okhotnik was unveiled at last year’s Army-2019 International Defense Exhibition outside of Moscow. The Okhotnik has mainly served as a technological demonstrator that highlights Russia’s ability to develop and deploy heavy strike drones.

The drone made its first joint flight with a Su-57 fifth-generation manned fighter last September, which indicated at the type that it could be deployed and even used in combat to support manned aircraft in mixed formations. During the test flight, the drone maneuvered in the air in the automated mode at an altitude of around sixteen hundred meters in a flight that lasts just over thirty minutes.

While the exact cost to develop the Okhotnik hasn’t been disclosed, according to a story published by Tass in June, the drone was insured for more than 1.2 billion rubles—or just over $18 million. Based on information published on the Russian government’s procurement web portal, the drone was insured against its loss including total or constructive total loss, disappearance or damage as the result of an incident during the insurance period.

The period was quite specific and included its operation in the test, demonstration and familiarization flights, flights under pilot training programs, and also in engine runs, taxiing, ground-based work, and system testing. In addition, the drone’s ground-based control post was insured for another 145.2 million rubles or $2.1 million.

The Okhotnik is not the only drone being developed for potential use with the Russian military. A rival strike drone, Orion, is also being developed by the Kronshtadt Group. The Orion is similar to the U.S. Air Force’s Predator drone, and it completed combat tests in Syria last year.