Russia’s Only Aircraft Carrier Will Get New MiG-29s 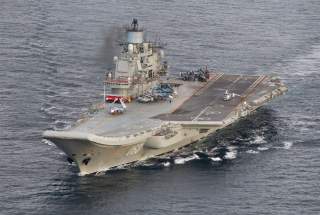 Russia’s sole remaining aircraft carrier Admiral Kuznetsov will have to be modified to handle its new complement of Mikoyan MiG-29KR Fulcrum-K multirole fighters when it returns to service.

The massive dilapidated Soviet-era vessel entered into dry-dock for repairs and upgrades earlier this year in May. The Russians expect to complete the modifications during Kuznetsov’s two and a half year overhaul period.

"MiG-29K/MiG-29KUB, Su-33 planes and some types of helicopters will be based on the warship,” Nevskoye Design Bureau chief Sergei Orlov told the state-owned TASS news agency.

“Some adjustments will be made precisely to accommodate MiG-29K/MiG-29KUB aircraft. Pilots want something new, something better and more reliable. Actually, the entire aircraft and technical compound of shipborne systems will be modernized."

The MiG-29KR has been tested onboard Kuznetsov before starting in 2016 and the ship had deployed to the Syrian coast with four MiG-29KRs onboard. Kuznetsov’s air wing lost one of those aircraft in November 2016 when the Fulcrum could not recover onboard the carrier due to a fouled deck, which was the result of a broken arrestor cable.

"The broken arresting cable and the delay in correcting the fault served as the starting point of the event," a Russian defense source told Lenta.ru at the time.

"The pilot was forced to eject after running out of fuel because the command did not want to send the aircraft to an alternate airfield, hoping for a quick resolution of the problem on the ship's deck. If [the pilot] landed at Hmeymim (in Syria), or especially in Cyprus, then the incident would have to be reported and there would be a reprimand."

While the Kuznetsov is being overhauled, the ship will not be completely modernized.

“It is a ship repair with replacement of some equipment." Sergei Vlasov, director general of Nevsky PKB told the TASS news agency last year. "Essentially, there is no modernization.”

One of the reasons that the Kremlin is not authorizing a much more extensive modernization of Russia’s sole aircraft carrier is because the ship needs to be back in the fleet quickly. A deep modernization might drag on for more than ten years given the state of Russian shipyards.

Russia cannot afford to be without Kuznetsov in the fleet for that long because it would lose expertise in other related areas such as carrier operations at sea—highlighting one of the problems of owning only one vessel of a type.

“It's clear why, because modernization risks dragging on for 10 years and costing a lot of money,” researcher Mikhail Barabanov, editor of the Moscow Defense Brief —published by the Centre for the Analysis of Strategies and Technologies (CAST)—told The National Interest last year.

“Since Kuznetsov is not so much a combat platform as a training platform, deep modernization for her is an obvious excess.”

Vasily Kashin, a senior fellow at the Center for Comprehensive European and International Studies at Moscow’s Higher School of Economics, agreed.

“Because a real modernization is likely to take much longer and the ship may be needed,” Kashin told The National Interest last year.

Kuznetsov is an old design that dates back to the late Soviet-era and at some point she will have to be replaced. However, a new Russian carrier is mostly a theoretical discussion at this point because Moscow currently lacks the resources to build such vessels until at least 2025.

“Currently it is obvious that Russia is unlikely to start building a second carrier before 2025 and that means that it is not likely to be operational before the early 2030s,” Kashin said.

“The situation is a bit like in the Soviet Union of the early period. The USSR did not really have the resources for an ocean going navy before the late 1960s, because of other challenges that were more important. As a result, the old battleships of the Russian Imperial Navy—the two of them which survived WWI and WWII—served until 1956.”