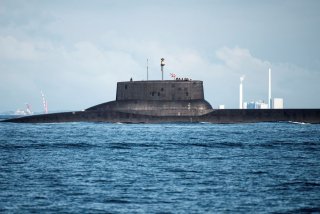 The first of the Russian Navy’s upgraded Project 955A Borei­-class ballistic missile submarines has completed its sea and weapons trial this month. Russian state media reported that the nuclear-powered Knyaz Vladmir conducted its sea trials in the White Sea, and has headed back to Sevmash, the submarine’s manufacturer, before the official hand-over to the Russian Navy.

The Russian Ministry of Defense’s press office reported that tugboats of the White Sea naval base and the Mikhail Rudnitsky rescue vessel were used to provide search-and-rescue support during the trials of the submarine. The trials were to address an undisclosed “problem” that had been exposed earlier with the boat.

Those sea trials took place above and underwater this month, and that followed the testing of its missile and submerged torpedo firing, which was completed late last year. During those weapons tests the submarine was supported by forces of the Russian Nothern Fleet’s White Sea naval base.

As part of those certification tests the boat test fired a RSM-56 Bulava (NATO reporting name: SS-N-32) submarine-launched ballistic missile (SLBM), which reportedly hit its designated target on the Kura missile test range on the Kamchatka peninsula. The three-stage solid propellant Bulava is a sea-launched variant of the Topol-M and has a range of over 8,300 kilometers. It can reportedly be fitted with six to 10 nuclear multiple warheads yielding 100 to 150 kilotons apiece, according to The Diplomat. In addition, the Bulava can be fitted with 10 to 40 decoy warheads. The submarine is also furnished with 533mm torpedo tubes.

The Knyaz Vladimir construction hasn’t exactly been what could be considered quick—it was laid down in 2012 and only floated out in 2017 following a two-year delay. Following the weapons tests it was commissioned into service with the Russian Northern Fleet.

It is the first of the upgraded Borei­-A (Project 955A) units to enter service with the Russian Navy, and the Project 955A features several modifications from the previous Project 955. These include major structural changes to the submarine’s hull, reduced acoustic signature, upgraded communication equipment and more advanced armament control systems. The submarine is reportedly less noisy and features improved maneuvering and depth. While initial reports claimed that the fourth generation 955A would have four additional (20 in total) launch tubes, the submarine has 16 missile tubes, the same as the original Project 955 submarines.

According to TASS, four additional Project 955A submarines are now being developed by the Rubin Central Design Bureau for Marine Engineering, which is part of the United Shipbuilding Corporation.

There are currently three of the older Project 955 nuclear-powered missile-carrying submarines operating with the Russian Northern and Pacific Fleets. These were the first class of submarines developed by Russia after the Soviet era. The first of the class, Yury Dolgoruky, was laid down in November 1996 and launched in February 2008. The boat officially entered service with the Russian Navy in January 2013.