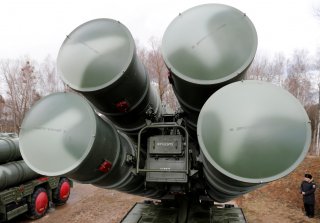 Russia’s latest long and medium-range surface-to-air missile system was put through another series of tests this week. According to the Russian Defense Ministry, the S-400 Triumf (NATO reporting name: SA-21 Growler) was used in a live-fire exercise at the Ashuluk training range. The exercises involved teams from the Western Military District’s Leningrad Air Defense Force.

“The S-400 Triumf air defense teams and command center practiced repelling a massive missile attack,” the Defense Ministry said in a statement to TASS. “During the mission, they detected and hit target missiles mimicking a notional enemy’s modern and advanced air attack weapons.”

Designed to destroy aircraft, cruise, and ballistic missiles, the platform can also be used against ground installations. Since it first entered service in 2007, the S-400 has become one of Russia’s most demanded high-end combat platforms. It began as part of the S-300 modernization project, but the S-400 also presents a vast leap in performance and capabilities over earlier S-300 models, even as 70 to 80 percent of the technology employed in the initial S-400 design was taken and adapted from the S-300. That included missile storage containers, launchers, and radar.

Yet, whereas the S-300 was explicitly designed as a long-range air defense system, the S-400 is currently compatible with four missiles that are meant to satisfy a wide spectrum of operational categories: very long-range 40N6E (400 kilometers), long-range 48N6 (250 kilometers), medium-range 9M96e2 (120 kilometers), and short-range 9m96e (40 kilometers).

It can launch 40N6 missiles and is designed to engage targets at a distance of up to four hundred kilometers at up to six times the speed of sound, from at an altitude of up to thirty kilometers under intensive enemy fire and jamming.

Its mission set and capabilities have been compared to that of the U.S. Patriot system, yet unlike some Patriot interceptors, the S-400 does not employ hit-to-kill ballistic missile defense technology. However, it has been reported that Russia has been developing a new interceptor—the 77N6—which is believed to employ such hit-to-kill technology.

Defending the Motherland and For Export

The S-400 is currently in service with the First Air Defense Corps, which is responsible for defending Moscow.

Additionally, in June of 2020, it was announced that the Russian military would receive an additional three regiments of the S-400 anti-aircraft missile systems, along with four sets of the S-350 ‘Vityaz’ battlefield air defense launchers by 2023 under new contracts with the Almaz-Antey defense manufacturer.