Russia’s Su-57 Stealth Fighter Could Be an Aerial Sniper 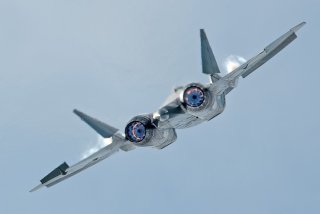 But for all this hard work it’s still unclear just how many copies of the Sukhoi Su-57 Moscow might acquire … and how it means to use them.

In 2013 Bill Sweetman, then a reporter for Aviation Week, proposed some theories.

If Sweetman is correct the angular, twin-engine warplane with the 50-foot wingspan could be bought in small numbers and used as a sort of airborne sniper, elusively flying high and fast to take down enemy radars and support planes using powerful, long-range missiles.

The Su-57's design and apparent weapons options seem to lend themselves to this niche role, which could exploit critical vulnerabilities in U.S. and allied forces and level the airpower playing field for the first time in a generation.

Especially considering the Chinese are apparently taking the same approach with their own new stealth fighter.

At the MAKS air show near Moscow in August 2013, several Su-57 test planes made appearances—and manufacturers also showed off missiles that could be fitted into the fighter's voluminous weapons bays or under its wings and fuselage.

But Sweetman, wandering the show, detected restraint on the part of the stealth fighter’s boosters. He declared the Su-57 exhibits “tamer than some people hoped.”

“I suspect that the fighter won’t be in service for some years, except possibly in the form of a small test squadron,” Sweetman noted. Moscow recently pushed back, to 2020, the Su-57's first delivery to front-line units.

But when it does enter service, even in limited numbers the Su-57 could have a big impact on rival forces. Scanning the missiles on display at MAKS, Sweetman concluded that the Su-57 could be armed with two powerful main weapons: a version of the Kh-58UShE anti-radar missile and the new RVV-BD air-to-air missile.

Both nearly 15 feet long, the Kh-58UShE and RVV-BD can hit targets 120 miles away or farther. The Kh-58UShE homes in on enemy radars; the RVV-BD is for destroying other warplanes.

The smaller AGM-88 anti-radar missile and AIM-120 air-to-air missile are the American analogues of the new Russian weapons. Both several feet shorter and hundreds of pounds lighter than their Russian counterparts, the U.S. munitions reflect a specifically American air-warfare philosophy.

American stealth jets including the B-2 bomber, the F-22 and the F-35 carry relatively small, lightweight weapons with short ranges.

The B-2's main munition is a 2,000-pound, satellite-guided gravity bomb. For attacking ground targets the F-22 and F-35 rely on a 500-pound, winged guided bomb that can glide up to 60 miles under optimal conditions.

And the F-22 and F-35's AIM-120 air-to-air missile, 12 feet from tip to tail, has a range of probably only 50 miles or so, although the precise distance is classified. Remarkably, no American stealth jets can carry anti-radar missiles like the Su-57 probably can.

The differences in weapons-loadouts point to opposing U.S. and Russian concepts for using stealth planes. With the exception of the F-22, American radar-evading jets are not particularly fast and must constantly sneak around in order to use their lighter, shorter-range weapons—therefore they need all-around stealth that makes them hard to detect from any angle.

The B-2 can fly thousands of miles but the F-22 and F-35 have modest fuel loads, forcing them to frequently refuel from aerial tankers.

The Su-57, on the other hand, is apparently being designed to blast through defenses in a fairly straight line, relying on front-only stealth features, high altitude, sustained speed and long range to swiftly fire long-reaching missiles at vulnerable targets deep behind enemy lines—without the help of aerial tankers, of which Russia possesses few.

This is not to say the Su-57 isn’t also highly maneuverable when it needs to be.

The Russian fighter’s preferred targets might include spy planes, Airborne Warning and Control System/Airborne Early Warning and Command (AWACS/AEW&C) aircraft, tankers and ground-based radars—in other words, all those vital systems that comprise the pricey, high-tech back-end in any U.S.-led air campaign.

Snipe the support systems and their crews and you hobble the enemy’s aerial war effort.

Moscow is not alone if indeed that is its approach to defeating its rivals in technological battle. China, too, has a new stealth fighter, the J-20. It’s big, heavy and potentially fast like the Su-57, likewise concentrates its stealth features up front and also has apparent new weapons.

Backed by support planes, the defending F-22s got in close and shot down 48 Su-27s, but the remaining Chinese planes managed to power through and destroy six tankers, two AWACS, four P-3 patrol planes and two Global Hawk spy drones, effectively crippling the U.S. force. With no tankers to refuel them, the F-22s crashed for lack of gas despite surviving the missile exchanges.

If older Su-27s firing older weapons could do that, newer and better Su-57s and J-20s with longer-range missiles might inflict even more devastating losses with fewer casualties of their own.

With these methods, it wouldn’t take many of the new Russian or Chinese jets to make a huge difference in any future air war. So Sweetman’s prediction that the Su-57 won’t be built in large numbers any time soon is cold comfort. With its powerful performance and weapons, Russia’s new warplane could tip the balance of power in the air.