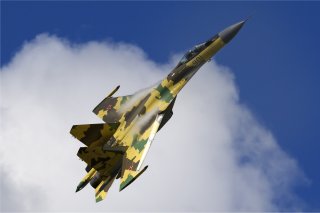 The fighter jet that eventually became the Su-35 has its roots in a 1980’s Soviet effort to develop an advanced variant of the Sukhoi Su-27, replete with new engines, overhauled avionics, and upgraded aerodynamic performance. This new fighter was dubbed the “Su-27M,” making its maiden flight in 1988. A handful of serial models made it out of the factory, but funding for the project quickly dried up in the years following the Soviet collapse. Sukhoi renamed the fighter the “Su-35” in an attempt to re-brand it for export markets, though little came of these early commercial efforts.

The Su-35 was revived in earnest only in the early 2000s, as part of an air force modernization program to close the widening gap between Russia’s vast, bloated inheritance of Soviet aircraft and Western late fourth-generation fighters. The fighter that we in the present day commonly refer to as the Su-35 is actually the “Su-35S,” a sweeping refit and redesign effort meant to account for the roughly fifteen-year gap between the original Su-27M and the contemporary Su-35S.

The Su-35S is a single-seat air superiority fighter, powered by the same twin AL-41F1S engines that went into the initial production batch of Su-57 fifth-generation multi-role fighters. The Su-35S offers a maximum speed of 2,400 kilometers per hour and combat range of 1,600 km, but these raw numbers belie one of the fighter’s greatest strengths: its supermaneuverability. The standard canard layout of prior Su-27 models was replaced by thrust-vectoring nozzles, which offered notable maneuverability gains in dogfighting scenarios.

The Su-35S received a glass cockpit and, with it, a sweeping avionics overhaul. LCD screens and digital controls replaced the traditional analog layout of older Su-27 variants. Although not exactly cutting-edge in the context of present-day avionics, the Su-35S’ upgraded Irbis-E passive electronically scanned array (PESA) radar is a potent tool in its own right that’s capable of tracking up to thirty targets at a range of around 350 kilometers.

But where the Su-35S truly excels against many of its fourth-generation counterparts, and even the fifth-generation F-22 Raptor, is its prodigious payload capacity and remarkably flexible weapons suite. The Flanker-E boasts a payload capacity of 8,000 kg, spread across twelve hardpoints, as well as an internal 30mm GSh-30-1 autocannon. The fighter’s six R-74 short-range air-to-air missiles fill the short-range engagement slot, while its twelve R-77 beyond-visual-range air-to-air missiles are typically seen as the Russian counterpart to the U.S. AIM-120 AMRAAM missiles. Despite its primary orientation as an air superiority platform, the Su-35 can capably play fly strike missions with its vast selection of guided bombs, as well as its air-to-surface and cruise missiles from the Kh-31/35/59 and Kalibr families. The Su-35 has reportedly filled ground-attack roles on several occasions throughout Russia’s intervention into the Syrian Civil War, whilst also tracking and intercepting Israeli jets flying in Syrian airspace.

The Su-35 did not quite manage to live up to the export role intended by Sukhoi, though the aircraft was procured in batches of twenty-four units by Chinese People’s Liberation Army Air Force and the Egyptian Air Force. Russia’s military is by far the largest Su-35 customer. At just under 100 models currently in service and dozens more on order, the Flanker-E comprises the backbone of Russia’s air superiority fleet. The Su-57 is slated to slowly phase out the Su-35S, with seventy-six such fighters projected to enter service by 2028, but only time will tell if Russia’s defense industry can churn out this many Su-57’s in such a short time frame.