Russia’s T-90 Tank Can Do Some Serious Damage 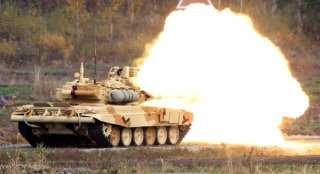 The workhorse of Russia’s main battle tank (MBT) force, the T-90 has distinguished itself over its three decades of service not only as one of Russia’s most versatile and capable MBT’s, but as a remarkably successful export product.

The T-90 was conceived as part of a program to unify a slew of Soviet tanks—including the T-72B, T-80U, and aging T-64—into a single MBT. The guiding idea was to cut down on the resource strain of serially producing several tanks at once, as well as to lay the foundations of a fresh platform for the future growth of Russia’s MBT industry.

Introduced in 1992, the T-90 is an amalgam of time-tested and class-leading features in late Soviet tank design. In essence, the T-90 concept is an attempt to outfit the efficient, reliable, and cost-effective T-72 hull with many of the advanced features found on the T-80 series.

The original T-90 boasts a “three-layered” protection system. First, there is the welded steel T-72 shell and the composite armor found on the turret and the sides. Then, there is the Kontakt-5 explosive reactive armor (ERA) that was first introduced on the T-80U. Finally, there is the Shtora-1 countermeasures suite, a collection of tools—including infrared-obscuring smoke grenades and 360-degree laser warning receiver—to disrupt enemy targeting systems. Coming in at just short of 50 tons, the T-90 is over 10 pounds lighter than the similar Abrams M1A2. The tank’s layout is broadly similar to the T-72, with a driver toward the front, engine in the rear, and two-man turret in the middle.

T-90’s blend of reliable and affordable performance made it an export hit across the developing world. The initial export variant, the T-90S, is largely the same as the original, but subsequent models featured wide-ranging performance improvements. The later T-90A offered an improved smoothbore cannon, as well as a new V-92S2 engine, a thermal imaging system, and more durable construction. The latest T-90M domestic and T-90MS export models featured more radical upgrades still, including the latest iterations of the 2A46M cannon, advanced V-92S2F engine capable of outputting 1130-1300 horsepower, improved “Kalina” fire control system with an integrated targeting suite, new remote-controlled weapon station (RCWS), and GLONASS navigation compatibility (for the T-90MS). Despite the introduction of the vastly more advanced T-90MS, the cheaper T-90S remains a popular export product because the two tanks target different price segments of the global arms market.

Serving in just under a dozen countries over 30 years after its introduction, the T-90 and its many variants are a potent reminder of what can be accomplished with a commitment to practical and cost-effective design.