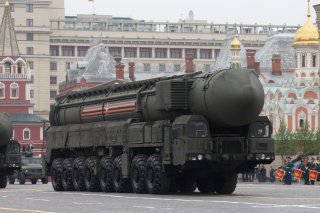 Russia’s Strategic Rocket Forces (abbreviated as RVSN in Russian) have kicked off large-scale exercises in the country’s central Sverdlovsk region.

"In total, more than 3,000 military personnel and about 300 items of equipment are involved in the exercise," reported Russia’s defense ministry, adding that the drills were principally aimed at honing the skills and general combat readiness of the RVSN’s command and control officers. "In the course of exercise, the intensive maneuvering actions of the Yars ground-mobile missile systems, their camouflage and countering modern and prospective air reconnaissance assets in cooperation with formations and units of the Central Military District will be performed at a qualitatively new level," the Defense Ministry noted.  "As a part of the exercise, the state of combat training will be inspected, an assessment of the capacity of weapons and special equipment will be evaluated. The Commission of the Strategic Missile Forces Command will assess the capacity of Tagil missile units, taking into account the rearmament.” It is unclear whether or not these current exercises are planned as part of a larger set of upcoming RVSN drills.

Whereas previous RVSN drills involved an eclectic mix of new and old equipment, these latest exercises appear to be focused around the Yars ICBM. RS-24 Yars, also known as Topol-MR, is one of Russia’s latest intercontinental ballistic missile (ICBM) systems. Yars is a further development of the Topol-M ICBM, armed with three to six multiple independently targetable warheads (MIRV’s), each reportedly capable of carrying a yield of 150-500 kilotons depending on the system’s precise configuration. As with its Topol-M counterpart, Yars is solid-fueled and can be deployed both in road-mobile and silo-based formats. The RS-24 is markedly heavier than the Topol-M, but is reportedly transported by the same MZKT-79221 16x16 Transporter erector launcher (TEL) as its predecessor.

The Yars ICBM is powered by Russia’s GLONASS digital inertial navigation system and reportedly takes only seven minutes to enter a launch-ready state. Russia’s missile forces have increasingly prioritized road-mobile weapons in recent decades. These systems are difficult to identify, track, and target, making them potentially more survivable than their silo-launched counterparts. Road-mobile ICBMs are viewed in Russian military thinking as a key source of strategic redundancy, offering an additional and relatively survivable deterrent in the event of a major nuclear conflict.

Despite its relative youth, the Yars ICBM is already on track to be replaced by the new Kedr ICBM system. Kedr, which will enter its active development stage in 2023-2024, is projected to start phasing out existing Yars regiments in the early 2030s.