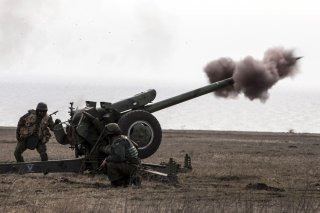 The Russian military has reached an agreement with the Azovstal garrison to evacuate wounded Ukrainian fighters, according to Russia’s Defense Ministry. “On May 16, as a result of negotiations with the Ukrainian military personnel blocked inside the territory of the Azovstal metallurgical plant in Mariupol, an agreement was reached to remove the wounded,” said Russia’s Defense Ministry, according to state news outlet TASS. The news comes on the heels of earlier, apparently incorrect reports that ten Ukrainian fighters emerged from the Azovstal plant and surrendered to Russian forces.

The wounded evacuees will be transported to a medical facility in Novoazovsk, located within the territory of the breakaway pro-Russian Donetsk People’s Republic (DPR). It is currently unclear if the Russian military has reached any additional agreements with the Azovstal garrison, including the terms of their possible surrender. Kyiv officials, who previously floated a scheme to swap the Azovstal defenders for Russian prisoners of war, have not commented on whether they approved or were aware of the Monday evacuation deal before it happened.

News of the purported evacuation agreement comes shortly on the heels of allegations, leveled by local pro-government officials, that the Russian military used what appear to be “incendiary or phosphorous bombs” against the Azovstal defenders.

The Azovstal garrison—composed in large part of the ultranationalist Azov Battalion—has appealed to global leaders, including U.S. president Joe Biden, Turkish president Recep Erdogan, and China’s Xi Jinping, to help facilitate their “extraction” to the territory of a third party state. The Kremlin has insisted that Azovstal’s remaining defenders have no option other than to surrender to the Russian forces that have encircled the plant.

Turkey has signaled interest in brokering a deal that would involve the Ukrainian fighters being taken to Istanbul by way of Russian-occupied Berdyansk. "If it can be done that way, we are happy to do it. We are ready. In fact our ship is ready to go and bring the injured soldiers and other civilians to Turkey," Erdogan’s spokesman Ibrahim Kalin told Reuters on Saturday.  Chechen leader Ramzan Kadyrov—whose forces have been actively involved in the Russian effort to seize the southeastern port hub of Mariupol, where the Azovstal facility is located—urged Ankara on Monday not to push for an evacuation effort. “I appeal to Turkish President Recep Tayyip Erdogan: the Azov guys are murderers are atheists that are being passed off as innocent victims of Russian aggression. Do not let yourself be fooled by criminals who are trying to use you to avoid trial and well-deserved punishment,” Kadyrov wrote on Telegram.