Russia And America Barely Avoided An Horrific Nuclear War In 1983 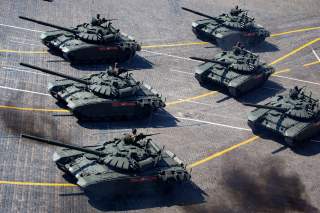 During his confirmation hearing three months later, Eugene Rostow, Reagan’s nominee to head the U.S. Arms Control and Disarmament Agency, was asked by Senator Claiborne Pell of Rhode Island if he believed the U.S. could survive an all-out nuclear war. Rostow replied, “The human race is very resilient. … Some estimates predict that there would be 10 million casualties on one side and 100 million on another. But that is not the whole of the population.”

And in 1982, T.K. Jones, the Pentagon’s Deputy Under Secretary for Strategic Nuclear Forces, told Los Angeles Times reporter Robert Scheer that the United States could recover from a nuclear war in “two to four years” if it implemented adequate civil defense measures.

What made the war scare so dangerous was the risk that if the Soviets became sufficiently convinced that a U.S. attack was imminent, they would decide to strike first. Indeed, this would have been the most logical thing for them to do. This disturbing possibility is raised several times throughout the PFIAB report.

“Soviet military writings consistently assert that overwhelming advantage lies with the side that launches massed nuclear strikes first,” it states. “The inherent danger of this doctrine of preemption is that in a period like the war scare, strong misperception could easily precipitate a strong, ill-founded reaction.”

It’s not clear what form a Soviet preemptive strike would have taken. It’s possible the Soviets would have limited their attack to U.S. intermediate-range nuclear forces in Europe. If so, it is likely that the United States would have felt compelled to retaliate by striking targets inside the USSR, a move that almost certainly would have led to further escalation.

An even more frightening possibility is that the Soviets might have decided to launch a massive first strike against the American homeland, one that would have targeted U.S. strategic nuclear forces as well as the nation’s political and military leadership. Such an outcome could have threatened the future of human civilization.

Fortunately, the 1983 war scare did not lead to a nuclear war, but the danger was quite real. The PFIAB assessment, declassified only in late 2015, adds a lot to public understanding of this very frightening episode of the late Cold War, but there is still much about it that remains unknown. Researchers are still awaiting the declassification of a 1984 British intelligence assessment on the subject, and Russian archives that might shed light on it remain inaccessible.

At the beginning of the report, its authors state that it is not intended to be the final word on the war scare, but rather a starting point for further exploration of it. At a time when many in Moscow have again come to view the United States as an implacable foe, renewed examination of this period could yield important lessons for today.